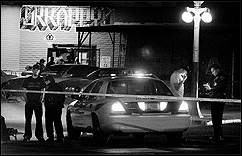 According to reports, a fight broke out at Skrappy's, a popular alcohol and drug-free all-ages club. Homicide detective Sgt. Mark Fuller told the Tucson Citizen that the incident spilled outside into the parking lot where the shooting of a 27-year old took place. Witnesses report that as many as 40 people were involved and others claim the involvement of "hardcore crew" FSU though this cannot be confirmed at the moment.

No charges have been laid yet, but some Skrappy's patrons fear for the future of the club. The next show scheduled for the club was a stop on Propagandhi's Crimean tour and that show looks like it may be moved to a different location.

"All of us at Eulogy/Hand Of Hope would like to send out our condolences to the family and friends of the individual that was killed and anyone else that was injured at the Street Brutality show at Scrappy's in Tucson, AZ last night. We hate to see any violence happen at hardcore shows but something of this magnitude is even sadder.

According to the Arizona Daily Star Skrappy's services, programs should continue.

The Star's view: A fatal shooting in a popular teen-club parking lot is an anomaly. Assessments and recommendations should strengthen the program.

There was a fatal shooting and several other people were injured after a fight erupted during an all-ages, five-band, heavy-metal concert at Skrappy's, 201 E. Broadway, Downtown.
This tragic incident puts a shroud on the teen hangout from which we hope it can emerge and continue to provide services to Tucson's youth.

Skrappy's is a nonprofit performing arts center and popular night spot for youth. It's best known as a venue that encourages local youth bands to perform. Founded in 1996, Skrappy's is also a youth center that has been part of Our Family (formerly Our Town), a social service agency, since 2001.

"It's a home for kids who have nowhere else to go," college student Diletta Dang told Mauet last spring. "If I go before 3:30 p.m. when it opens, there are kids already waiting to go in."

"It brings in the shows kids want to see, but with no drugs or alcohol," Tess Hogan told Mauet. At the time, Hogan was a 19-year-old college student who began going to Skrappy's at age 15. "It's a place parents can feel safe leaving their kids."

Skrappy's has been "a relatively trouble-free place," Officer Chris Wildblood, who patrols the neighborhood and responded to the fight, told the Star's Becky Pallack in Friday's Star.

Police were called to Skrappy's five other times this year, including one call for an assault victim with a minor injury. The other calls were for property crimes, Pallack reported.

Wednesday night, the hard-core metal band Shattered Realm was in the lineup. The band was recommended to Skrappy's staff, said Sue Krahe-Eggleston, executive director of Our Family. Shattered Realm has ties to violent gang FSU, which has been linked to hard-core music accompanied by a violent style of dancing — a reputation that does not dovetail with Skrappy's.

The people who recommended the band were "highly respected" by staff, and they were devastated by the incident, said Krahe-Eggleston Friday afternoon.

Skrappy's musical genre is generally punk and rock. However, when Skrappy's started out, heavy-metal was its staple. The venue has one or two metal concerts each year, Krahe-Eggleston said.

Wednesday's concert apparently went awry during the band's second song when a group of adults in their 20s "invaded" the club and started shoving people, Krahe-Eggleston said in Friday's Star.

Skrappy's staff members quickly responded — stopped the show, got people out of the building and called police, according to the Star story. The pushing escalated into a brawl, a shooting and a death.

Skrappy's canceled its weekend shows; it remained open for youth to gather. Only local and garage-band concerts are scheduled for the coming weeks, Krahe-Eggleston said.

Our Family's staff is working with the youth involved with Skrappy's to develop recommendations, Krahe-Eggleston said. She said she expected the kids' recommendations to be tough.

More than 17,000 young people participated in Skrappy's programs or services last year, according to a press statement. With so few places for teens to just "hang" — visit with friends, relax and just be themselves — we hope Skrappy's can regroup after this tragedy and continue to provide even stronger, vital teen activities.