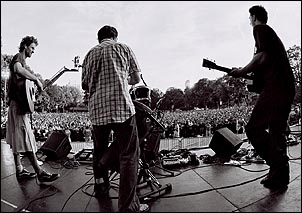 NEW YORK (CelebrityAccess MediaWire) — Jam Band Dispatch has announced that they will be reuniting for a special benefit concert at Madison Square Gardens on July 17th. Most of the proceeds from the concert will be donated to aid work in the African nation of Zimbabwe with a smaller portion being donated to local charities in the New York Area.

This concert may well become one of the hottest tickets of the summer, no mean feat considering the subtle approach being taken to marketing. "We're all really excited. The response has been overwhelming. Its what the band is all about, not to do commercial promoting. Instead, we're doing net-based viral marketing and offline street teams to get the word out." the band's manager, Steve Burksy told CelebrityAccess

Wait a minute..Dispatch? If you're asking that question, you might not be alone. Dispatch was a highly-successful band that rose to prominence almost entirely outside of the normal industry framework. A jam band from Vermont, they were one of the first bands to break big through viral marketing and internet-based file sharing through services like Napster (The old, free version). Comprised of three musicians who were, at that time, attending Middlebury College in Vermont, the band's musical influence was a fusion of disparate threads of acoustic folk, rock, reggae, and even some funk thrown in for good measure. The band rose to prominence through word of mouth, fans telling other fans and sharing tunes over the 'net served to expand their fan base well past their initial regional exposure in New England. The band went on to release 4 studio albums and three live albums.

In 2004, Dispatch had decided to call it quits and arranged a free farewell concert, performing on July 31st at the Hatch Shell in Boston. The concert had very little promotion behind it, receiving support from beverage company Nantucket Nectars and local Boston FM Station WBOS. The concert was a smash-success, pulling in 110,000 fans by one estimate with some coming from as far away as Italy, South Africa and Australia.

According to Bursky, members of the band approached him early last summer.

"A few members of the band came to talk to me about their growing concern with the plight of Zimbabwe" Steve told CelebrityAccess "And after some conversation, I suggested the idea of a benefit concert."

The African nation of Zimbabwe, formerly known as Rhodesia, has led a tumultuous existence. First declaring its independence from the United Kingdom in 1980, it has been plagued by political unrest, poverty, drought and HIV under the rule of Robert Mugabe. Mugabe has ruled the country since its inception and he has recently stated that he intends to rule "until he is 100 years old," despite substantial international criticism about economic malfeasance and human rights abuses that have been directed as his government.

Members of the band have had long involvement with Zimbabwe. Guitarist Chad Urmston taught English there right after his senior year of high school in 1994. His experiences there led him to establish a non-profit, The Elias Fund, to provide educational scholarships to the youth of Zimbabwe. The fund is named after a friend that that he met during his time there and was the inspiration for one of the band's most successful tracks.

Chad's Band mate Brad also participates in a number of projects designed to benefit impoverished peoples Central & South America as well as Africa. He has organized a compilation CD entitled "the Relief Project" to raise funds for Save the Children as well as other fundraising efforts on behalf of Tsunami victims and Sudan among other things.

When asked by CelebrityAccess if this was a one-time event, Bursky replied "the band realizes that they have a great platform to do socially-conscious work from, no firm commitments have been made beyond this concert"

Tickets for the event start pre-sale on January 10 at 12 PM EST and will extend through Friday, January 19th at 5pm EST and the band has announced that friends on their MySpace page will get the first crack. In order to be included, add Dispatch as your friend on MySpace Friends of Dispatch will be blasted a Ticketmaster link and Password (via MySpace Bulletin) shortly before the presale begins. – CelebrityAccess Staff Writers.