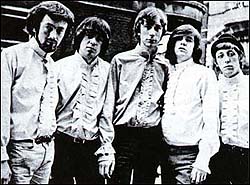 Plans are for The Amazing World of Arthur Brown and The Malchicks to open for the Pretty Things on select dates of their 2007 U.S. tour in support of all three CD releases.

The first three CD titles are scheduled to be released by ZOHO in May/June 2007 and will include "Welcome", the long-awaited comeback record by the legendary British classic rock/R&B group The Pretty Things. "Welcome," the working title, is the band’s first new recording in over eight years, and it will be released on ZOHO’s new ZOHO Roots label imprint in early summer 2007, to coincide with the band’s planned U.S. East Coast tour. The album will feature around 13 songs in both electric and acoustic formats, including new songs written by the band, and some unexpected and unique blues/acoustic standards.

"The new Pretty Things release is their strongest record in over 25 years, maybe the strongest record they have ever made…..", explains St John, who is also the band’s manager. "The music displays a fierce, ferocious energy and is deeply rooted in the passion of the blues and early R&B, both electric and acoustic, with some amazing steel guitar playing by Dick Taylor. Singer Phil May demonstrates why he is considered one of the great British rock vocalists of the last few decades.

"The Pretty Things are unique among the surviving major British invasion rock groups of the 1960s in that they are still playing in an original version line-up from 1966 which formed during the making of their second LP "Get the Picture, " he continues. "The only addition to this line up occurred in 1992 when Frank Holland joined the group as a second lead guitarist.

"It is this unbroken vein of originality, together with their indelible credibility, which attracts such a young audience to the band, wherever they play," adds St. John. "Fans of real music are looking for the source influences of the current artists they love, and The Pretty Things are a prime source for many, and still in original state."

"I am thrilled and honored to welcome The Pretty Things to the label", says Becker. "The band’s colorful history from being a spin-off from the early Rolling Stones in 1963 to today, their many classic hits and albums, and their fearless never play it safe attitude have given them a devoted cult following in the U.S. Their new release "Welcome" is a fantastic fit with ZOHO Roots'’ label philosophy of delivering the real deal in blues, R&B, and classic rock."

"The Voice of Love" is a new all-acoustic record by British soul singer Arthur Brown. As founder of the British cult band The Crazy World of Arthur Brown Brown's greatest international success was his anthemic 1968 hit "Fire," which was the first recording to top the album and singles charts in both the USA and Europe. On "The Voice of Love," his first new studio recording in over 10 years, he again showcases his powerful vocals and songwriting in a set of 11 new rootsy, British folk-inspired songs with a driving acoustic groove. He is currently playing a few selected dates in Canada and the North West of the US to prepare for the release of the CD, before flying back to Europe to tour extensively before Christmas.

Malchicks is a teen-aged, blues group, based on the South coast of England, dedicated to contemporary interpretations of the classic 1950s and 60s Chicago and Memphis blues of Muddy Waters, John Lee Hooker, Bo Diddley, Screaming Jay Hawkins and others. The band, who developed a passion for the blues after seeing the Martin Scorcese "Blues" film series in the UK (which Mark St. John was instrumental in getting shown by the BBC), were all only 13, at the time of starting to record their eponymous album. The Pretty Things’ lead guitarist Dick Taylor was involved as the musical coach for the project, and, in his words, "passed the baton, that Mick, Keith and I first received, when we were listening to the same music as The Stones were starting up." –Bob Grossweiner and Jane Cohen