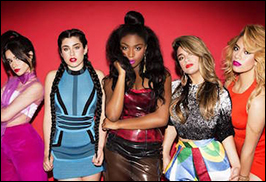 MONTERREY, Mexico (CelebrityAccess) — Fifth Harmony's Ally Brooke Hernandez was nearly knocked to the ground by a fan who rushed on stage during a show on the Mexican leg of the group's tour.

In a video of the incident, the fan can be seen to run up and grapple Brooke during the group's performance at the Auditorio Banamex, before he was hustled off by security. Brooke seemed surprised by the incident but managed to continue her performance.

She later announced that she was uninjured, telling Entertainment Tonight, "I am thankful that I or anyone else was not injured, as these incidents could have gone awry, I love the fans and appreciate their excitement and love for us, however, these situations could easily escalate in the wrong direction for us and the fans."

The incident comes just days after a similar encounter at Monterrey's airport, where she was grabbed by an overly enthusiastic fan.

The group wrapped up the Mexican part of their current 7/27 tour and are heading for Europe, with shows kicking off on Oct 4th at 3Arena in Dublin. – Staff Writers