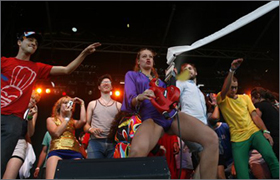 NASHVILLE, TN (CelebrityAccess MediaWire) — A partial stage collapse during a gig by Girl Talk, AKA Gregg Gillis, left a burst water pipe, a damaged stage and some started concert-goers but fortunately left no one injured.

According to the Tennessean, Gillis had requested that the venue owners allow fans up on stage. Gillis is known for his interactive shows and seems to be at his best when he's in the middle of a throng of fans and apparently, the Cannery Ballroom was no different.

"The safety of our patrons is our primary concern. We take great pride in being a responsible venue," venue co-owner Todd Ohlhauser told the Tennessean. "Girl Talk played here a year and half ago without incident. Since that time, his audience has become younger and stupider. Girl Talk's security demanded that there be no barricade (in front of the stage). Security did the best that they could, but people were acting like animals."

"Nobody got hurt and everything is fine," he continued. "There was minor damage from a busted sprinkler pipe and some water leakage, but it could have been avoided had Girl Talk been more responsible in their security demands and had the audience acted more responsible. We got the situation under control as quickly as we could. The audience has to take responsibility for their actions. They shouldn't expect to come back or have another show like that."

The stage and the broken pipe were quickly repaired and no scheduled events were adversely affected. – CelebrityAccess Staff Writers