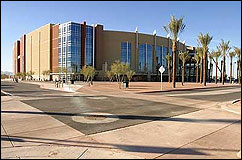 (CelebrityAccess MediaWire) — When officials at both Arizona’s Glendale Arena and America West Arena were trying desperately to book the wildly popular Irish rock group U2 for a stop on their highly anticipated Vertigo tour, the win went to the deserving venue. Glendale Arena pulled out the big guns, its best marketing asset, during the final negotiations.

Hockey legend Wayne Gretzky, co-owner of the Phoenix Coyotes, which manages the arena, phoned the band’s promoter and offered to play a round of golf with the rockers if they would play Glendale Arena instead of America West, according to an official at Glendale.

The band actually declined the golf, but chose the arena over America West.

Since its opening in December of 2003, Glendale Arena has been able to land some of the biggest names in entertainment, including acts such as Cher, Britney Spears and Prince, among others. The success of the new venue has created a brutal showdown between the two facilities. Phoenix politics have been caught up in the storm as well, as funding of the America West Arena leads toward downtown renewal, while Glendale Arena’s location and profits benefit suburban growth.

Glendale Arena’s two U2 shows, booked for April 14 and 15, sold out in only 40 minutes total. Following those, Elton John will be performing on May 5. –by CelebrityAccess Staff Writers