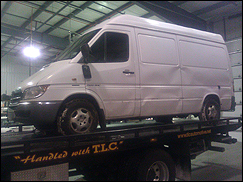 STERLING, CO (CelebrityAccess MediaWire) — Denver-based musician Ian Cooke's tour suffered a blow when the performer was involved in a van accident on Wednesday morning while traveling to a show in Omaha.


Despite flipping the van completely over, Cooke was not injured and, once repairs are made, hopes to continue his tour.


"He apparently hit some black ice near Sterling, Colorado. He said he was fully awake, had not been drinking, and was not messing with his phone. 'Just listening to Christian radio,' he said.
The van lost control, spun, and flipped all the way over so that he landed back on his wheels. He was not injured at all. One tire popped off of the rim and there are dents and scratches everywhere. The side sliding door had opened during the flipping and a bunch of dirt came inside the van. The rear doors are dented but stay shut when locked. The axle and undercarriage is fine. It is crazy to me that no windows were broken.


"The tire is the main issue because debris got between the tire and rim. As it is now they warned of going at high speeds on the highway because of the tires popping off because of the debris.
He wants to continue the tour as soon as the van is road-ready. He suggested starting the tour in Lincoln on Saturday but is willing to drive to Davenport or Des Moines earlier if the van is good to go.
Some records were snapped in the wreck and a bunch of CDs got dirt in them – but he has cleaned all of that up already."

Cooke has been on the road in support of his latest album "Fortitude."