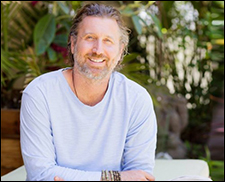 In an interview with The Washington Post, Garner details a moment of clarity when his mother died of cancer that led him to question his previous set of values – a moment that ultimately led to him leaving his job and seeking a simpler life.

"I was responsible for 20,000 concerts a year around the globe. It was a really big job. I had been raised by a single mom in a trailer park in Arizona. I’d barely finished high school, and scraped my way as an entrepreneur into this great job. I was right at the top of my game. I thought I had it all.

"But inside was this nagging insecurity, a nagging fear that had been lingering with me for a long time. Questions like, Does anybody love me for who I am? What am I if I don’t have this job? What if I fail at my next task? I had all this fear in me, that kept driving me higher and higher looking for reprieve. But with every new success, there was this voice that taunted, ‘You’re not good enough," Garner told The Times.

Following the death of his mother, Garner says he spent time in the Asia, studying yoga, meditation and nutrition in what Garner describes as a learning adventure.

“Now, I have a daily practice of taking care of myself, and reminding myself from the cells up that I matter,” Garner told The Times.

If you’re interested in learning more about Garner’s spiritual voyage, he’s published a new memoir “And I breathed” and he maintains a blog at jasongarner.com. – Staff Writers