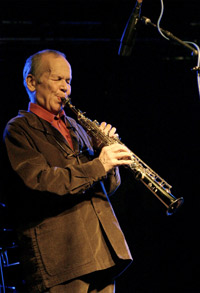 (CelebrityAccess MediaWire) – Steve Lacy, a leading soprano saxophonist in the modern era of jazz and one of the few jazz musicians awarded a MacArthur Fellowship, the so-called “genius grant,” has died. He was 69.

Comfortable in various musical forms, Lacy played Dixieland and avant-garde, and with his own groups often incorporated beat poetry, the writings of Herman Melville and obscure Islamic verse.

“He was a distinctive player and a true original in this music,” jazz critic Nat Hentoff said. “He had an enormous appetite for the music and an ability to keep surprising himself by exploring new avenues.”

Influenced by such diverse forces as New Orleans-style saxophonist Sidney Bechet and groundbreaking pianist and composer Thelonious Monk, Lacy developed a beauty and clarity of tone, a keen melodic sense and an ability to keep his music uncompromising and fresh.

From the mid-'60s onward, Lacy was associated with the free-jazz movement and, finding little work in America, lived, wrote and recorded for much of the next four decades in Europe, primarily France, where he was awarded the Chevalier of the Order of Arts and Letters in 1989 and in 2002, Commander of the Order. –by CelebrityAccess Staff Writers