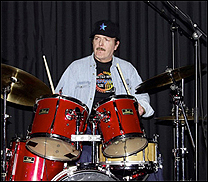 Born in Port Arthur, Texas, Uncle John was a childhood friend of another southeast Texas native, Johnny Winter. While playing drums with Winter in 1968, Turner convinced him to try a full-blown blues band format and sent for his friend Tommy Shannon to play bass. Success quickly followed, and the trio went on to record what many consider to be three of Johnny Winter’s finest albums: “The Progressive Blues Experiment,” “Johnny Winter,” and “Second Winter.” With fourth member Edgar Winter, they played Woodstock in 1969, as well as numerous other festivals and shows around the world.

After splitting with Johnny Winter in 1970, Uncle John moved to Austin, where he and Shannon formed Krackerjack, a band featuring a young Stevie Ray Vaughan on guitar. Throughout his long career, Turner played or recorded with many great artists, including B.B. King, Jimi Hendrix, Freddie King, Muddy Waters, and Lightnin’ Hopkins.

In November of 2006, Uncle John Turner was reunited with Johnny Winter and Tommy Shannon during Winter’s show at Austin’s La Zona Rosa nightclub. It was the trio’s first live performance together in more than 20 years, and it proved to be a very special night for everyone lucky enough to witness the sold-out event.

A benefit concert planned for Uncle John Turner at Antone’s nightclub in Austin on August 1st will go on as scheduled. Johnny Winter, Tommy Shannon, and other friends and former band mates are among the performers scheduled to appear. Event profits will be used to offset medical bills and final arrangements, as well as to assist talented young blues artists. Additional information is posted online at www.uncathon.com. Along with a guestbook for messages for Uncle John’s friends and family, information regarding donations and other pertinent details may also be found there. An additional memorial event is being planned; details are forthcoming.

Uncle John Turner is survived by his wife Morgan.