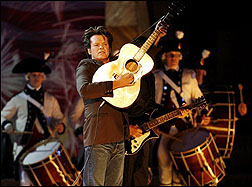 NEW YORK (CelebrityAccess MediaWire) — John Mellencamp was in New York last week to attend workshop performances of The Ghost Brothers of Darkland County, the musical play he’s written with Stephen King. While in town, he accepted an invitation to be a guest on Comedy Central’s Colbert Report

Mellencamp was informed by Colbert that his presence completed what he called his “Farm Aid Collectors Set,” in light of the fact that Farm Aid’s other co-founders, Willie Nelson and Neil Young, had appeared on the program previously. Mellencamp invited Colbert to help mc the upcoming Farm Aid 2007: A Homegrown Festival which, this year, takes place on September 9th on Randall’s Island in New York City. The two kibitzed about Colbert’s “farmer’s tan,” or lack thereof, and got into a heated discussion about the war in Iraq. Colbert asked, “As a member of heartlandia, you support the war in Iraq, don’t you?” To which Mellencamp replied, “I didn’t get the memo.”

The two discussed scripture (“an eye for an eye…” vs. “do unto others…”) after which Mellencamp theorized that his host had “never been in a fight in [his] life” to which Colbert responded, “In the playground, I scratched a few eyes out.” Upending his own desk, Colbert pushed Mellencamp and jabbed at him, assuming a pugilistic posture. Mellencamp proffered his fists at this provocation and menacingly proclaimed “I’m for peace but I’m not a pacifist.” At this point, Colbert judiciously called for a commercial break. Following the break, hostilities had ceased as Colbert introduced his guest who performed a haunting, acoustic, solo version of “Our Country.”

Upon his return to his native Indiana, Mellencamp noted, “That New York trip last week was very productive. The play went well and so did the visit to The Colbert Report. I got to work with two guys named Stephen and nobody got hurt.. but it was touch and go with one of them.” – CelebrityAccess Staff Writers