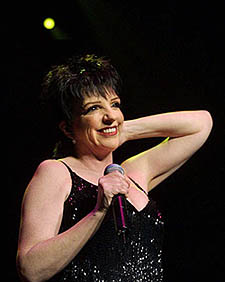 Liza Minnelli completed a successful five-night run of her new show, "Liza's Back!," at London's renowned Royal Albert Hall on April 7. Playing to more than 15,000 fans, the show marked her return to the London stage for the first time since 1995.

Minnelli flew to Rome the following day to receive the David Di Donatello Lifetime Achievement Award, to be presented on April 9. The Donatello is the Italian equivalent to The Oscars, and has been awarded in the past to such greats as Sophia Loren, Elizabeth Taylor, Marilyn Monroe, Marlene Dietrich, Henry Fonda and Fred Astaire to name a few.

Minnelli's husband David Gest, who created and produced "Liza's Back!," plans to bring the show to Broadway.