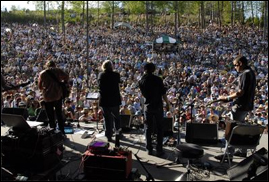 WILKESBORO, NC (CelebrityAccess MediaWire) — As the last notes of music rang out over the hillside and crews began dismantling stages, preliminary estimates showed that over the festival's four days more than 70,000 music fans filled the campus of Wilkes Community College in Wilkesboro for MerleFest 2009, presented by Lowe's. The weather in western North Carolina felt more like summer than spring, with sunny days and high temperatures in the '80s. One storm blew through on Friday evening, delaying some of the performances for just a few minutes.

Even in a tough economy, attendance on Thursday was the 5th highest on a Thursday in the festival's history. On Friday, MerleFest experienced the 4th highest Friday attendance, while Saturday's numbers were on par with Saturday of 2008. At the time of this release, Sunday's final numbers were not available.

"We have had an incredible weekend, with so many dedicated fans taking advantage of the beautiful weather and enjoying a wide range of musical performances," says festival director Ted Hagaman. "Reports from surveys and interviews with fans tell us that our attendees took advantage of the entertainment value that we take pride in offering every year. With over 95 artists performing on 15 stages over the four days of the festival, in addition to a variety of activities and shopping, there was truly something for everyone. We're grateful to the folks of Wilkes County, to everyone who works here at the college, to all of our volunteers, and of course the fans, for making our 22nd festival another one worthy of the history books."

MerleFest honors the memory of Eddy Merle Watson and the musical contributions of Doc, Merle and the entire Watson family. The event started in 1988 and is the biggest fund-raiser for the college.

The highly anticipated Hillside Album Hour on Saturday evening, hosted by The Waybacks, featured the Rolling Stones' Sticky Fingers, with Emmylou Harris turning in a surprise performance of "Wild Horses." As usual, the hillside was packed with delighted music fans who gathered to find out the album that would be featured, which is always a closely held secret until the show begins.

The legendary Doc Watson performed throughout the weekend including the memorable Docabilly set, featuring Doc and friends applying their style to classic pop tunes. The fan-favorite My Friend Merle set included friends of Merle sharing special memories between their favorite songs.

In addition to promoting "traditional-plus" music, a term coined by Doc Watson to describe the wide variety of musical genres and styles celebrated at MerleFest, the festival also featured heritage crafts demonstrations, instrument picking lessons and jam sessions, dancing, instrument contests, and the Chris Austin Songwriting Contest. The Shoppes at MerleFest, located in the center of the festival grounds, was a popular area filled with merchandise vendors, the official MerleFest Gift Shop, concessions, and valuable services including an information tent, lost and found, overnight storage, and more. There was also an R&R tent for festival-goers who needed to take a break and escape the heat.

MerleFest prides itself on creating a family-friendly atmosphere, and a key part of that effort is the Little Pickers area, sponsored by Charlotte and Greensboro Area Burger King Restaurants. The area included a stage with special performances for children, as well as crafts and other activities to add to their enjoyment of the festival.

A significant part of MerleFest's mission is to give back to the community. In that spirit, the outreach program took place on Thursday, with more than 25 of the artists at MerleFest giving performances at local schools, churches and community centers. In addition, on Friday morning, over 3,000 school children from Wilkes and surrounding counties were invited to attend the festival and flooded the event grounds.

Volunteers are integral to the success of MerleFest. Over 500 individual volunteers, 150 volunteer stagehands, and over 35 volunteer groups, including college and community organizations, helped to make the festival a success. Also, each food vendor at MerleFest supports a local non-profit, with proceeds going to further their work and mission. "We are grateful to all of our volunteers, many of whom have given their time each year since the festival began," says festival director Ted Hagaman. "MerleFest wouldn't be possible without their support."