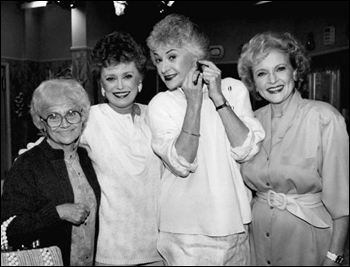 LOS ANGELES (AP) — Beatrice Arthur, the tall, deep-voiced actress whose razor-sharp delivery of comedy lines made her a TV star in the hit shows "Maude" and "The Golden Girls" and who won a Tony Award for the musical "Mame," died Saturday. She was 86.

Arthur died peacefully at her Los Angeles home with her family at her side, family spokesman Dan Watt said. She had cancer, Watt said, declining to give details.

"She was a brilliant and witty woman," said Watt, who was Arthur's personal assistant for six years. "Bea will always have a special place in my heart."

Arthur first appeared in the landmark comedy series "All in the Family" as Edith Bunker's outspoken, liberal cousin, Maude Finley. She proved a perfect foil for blue-collar bigot Archie Bunker (Carroll O'Connor), and their blistering exchanges were so entertaining that producer Norman Lear fashioned Arthur's own series.

In a 2008 interview with The Associated Press, Arthur said she was lucky to be discovered by TV after a long stage career, recalling with bemusement CBS executives asking about the new "girl."

"I was already 50 years old. I had done so much off-Broadway, on Broadway, but they said, `Who is that girl? Let's give her her own series,'" Arthur said.

"Maude" scored with television viewers immediately on its CBS debut in September 1972, and Arthur won an Emmy Award for the role in 1977.

The comedy flowed from Maude's efforts to cast off the traditional restraints that women faced, but the series often had a serious base. Her husband Walter (Bill Macy) became an alcoholic, and she underwent an abortion, which drew a torrent of viewer protests. Maude became a standard bearer for the growing feminist movement in America.

"She was an incredible actress and a woman I will miss, and I think everyone else will," said Bud Yorkin, producer of "Maude" with partner Lear.

The ratings of "Maude" in the early years approached those of its parent, "All in the Family," but by 1977 the audience started to dwindle. A major format change was planned, but in early 1978 Arthur announced she was quitting the show.

"It's been absolutely glorious; I've loved every minute of it," she said. "But it's been six years, and I think it's time to leave."

"Golden Girls" (1985-1992) was another groundbreaking comedy, finding surprising success in a television market increasingly skewed toward a younger, product-buying audience.

The series concerned three retirees — Arthur, Betty White and Rue McClanahan — and the mother of Arthur's character, Estelle Getty, who lived together in a Miami house. In contrast to the violent "Miami Vice," the comedy was nicknamed "Miami Nice."

As Dorothy Zbornak, Arthur seemed as caustic and domineering as Maude. She was unconcerned about the similarity of the two roles. "Look — I'm 5-feet-9, I have a deep voice and I have a way with a line," she told an interviewer. "What can I do about it? I can't stay home waiting for something different. I think it's a total waste of energy worrying about typecasting."

The interplay among the four women and their relations with men fueled the comedy, and the show amassed a big audience and 10 Emmys, including two as best comedy series and individual awards for each of the stars.

McClanahan said Arthur felt constrained by the show during its later years and in 1992 she announced she was leaving "Golden Girls."

"Bea liked to be the star of the show, she didn't really like to do that ensemble playing," McClanahan said.

The three other stars returned in "The Golden Palace," but it lasted only one season.

Arthur was born Bernice Frankel in New York City in 1922. When she was 11, her family moved to Cambridge, Md., where her father opened a clothing store. At 12 she had grown to full height, and she dreamed of being a petite blond movie star like June Allyson. There was one advantage of being tall and deep-voiced: She was chosen for the male roles in school plays.

Bernice — she hated the name and adopted her mother's nickname of Bea — overcame shyness about her size by winning over her classmates with wisecracks. She was elected the wittiest girl in her class. After two years at a junior college in Virginia, she earned a degree as a medical lab technician, but she "loathed" doing lab work at a hospital.

Acting held more appeal, and she enrolled in a drama course at the New School of Social Research in New York City. To support herself, she sang in a night spot that required her to push drinks on customers.

During this time she had a brief marriage that provided her stage name of Beatrice Arthur. In 1950, she married again, to Broadway actor and future Tony-winning director Gene Saks.

After a few years in off-Broadway and stock company plays and television dramas, Arthur's career gathered momentum with her role as Lucy Brown in the 1955 production of "The Threepenny Opera."

In 2008, when Arthur was inducted in the TV Academy Hall of Fame, Arthur pointed to the role as the highlight of her long career.

More plays and musicals followed, and she also sang in nightclubs and played small roles in TV comedy shows.

Then, in 1964, Harold Prince cast her as Yente the Matchmaker in the original company of "Fiddler on the Roof."

Arthur's biggest Broadway triumph came in 1966 as Vera Charles, Angela Lansbury's acerbic friend in the musical "Mame," directed by Saks. Richard Watts of the New York Post called her performance "a portrait in acid of a savagely witty, cynical and serpent-tongued woman."

"She was a rare and unique performer and a dear, dear friend," Lansbury said in a statement.

Arthur won the Tony as best supporting actress and repeated the role in the unsuccessful film version that also was directed by Saks, starring Lucille Ball as Mame. Arthur would play a variation of Vera Charles in "Maude" and "The Golden Girls."

"There was no one else like Bea," said "Mame" composer Jerry Herman. "She would make us laugh during `Mame' rehearsals with a look or with a word. She didn't need dialogue. I don't know if I can say that about any other person I ever worked with."

In 1983, Arthur attempted another series, "Amanda's," an Americanized version of John Cleese's hilarious "Fawlty Towers." She was cast as owner of a small seaside hotel with a staff of eccentrics. It lasted a mere nine episodes.

The plays included Woody Allen's "The Floating Light Bulb" and "The Bermuda Avenue Triangle," written by and costarring Renee Taylor and Joseph Bologna. During 2001 and 2002 she toured the country in a one-woman show of songs and stories, "… And Then There's Bea."

Arthur and Saks divorced in 1978 after 28 years. They had two sons, Matthew and Daniel. In his long career, Saks won Tonys for "I Love My Wife," "Brighton Beach Memoirs" and "Biloxi Blues." One of his Tony nominations was for "Mame."

In 1999, Arthur told an interviewer of the three influences in her career: "Sid Caesar taught me the outrageous; (method acting guru) Lee Strasberg taught me what I call reality; and ('Threepenny Opera' star) Lotte Lenya, whom I adored, taught me economy."

In recent years, Arthur made guest appearances on shows including "Curb Your Enthusiasm" and "Malcolm in the Middle." She was chairwoman of the Art Attack Foundation, a nonprofit performing arts scholarship organization, and was an honorary director of People for the Ethical Treatment of Animals.

Arthur is survived by her sons and two granddaughters. No funeral services are planned.