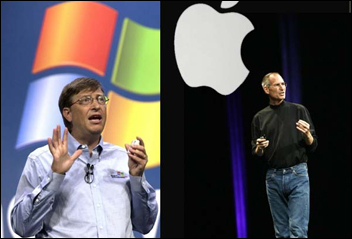 You can’t convince customers cheaper is better, not in music.

This week Apple and Microsoft announced their quarterly results. Apple’s were staggeringly good. Mac sales dipped ever so slightly, but iPod sales were up and iPhone sales were humongous. In other words, people will pay premium prices for perceived quality. Just like you can’t get a ticket for a superstar act.

Superstars… Remember Microsoft’s Bob initiative? The woman who spearheaded it became Bill Gates’ wife, but it was derided by the public and never adopted. Same deal with those Microsoft tablets. These products were ill-conceived. Microsoft had the infrastructure to develop them, they just never asked themselves whether the public would want them.

And now Microsoft is telling people to buy their products because they’re cheap. Imagine trying to get people to see a developing act live by saying tickets are $30 instead of $100. God, you can’t even get people to go for free! They’ve got too many entertainment options. Shit, no one cares if you’re giving away a single on iTunes or Amazon anymore. People expect to be able to hear the new stuff for free.

The music business needs an iPhone.

But all we’re getting is Bobs and tablets.

The starmakers are knowledgeable in the old infrastructure. Their concept of innovation is finding a new act to flog, there’s nothing new at the core. How do we get someone so cute, so sexy that the magazines and television will promote them. They don’t ask how we can find something so unique that the public will be drawn to them.

That’s our dilemma. Where is music’s "Sopranos"? Where is its "Slumdog Millionaire"? Where is the product that’s unforeseen, yet is clamored for.

The iPhone is a bigger hit today, based on not only its ubiquity, but its 3G capabilities and the App Store. In other words, the iPhone is on its second album, and has toured extensively. Unlike in the music business, Apple replaces the product with a new iteration each and every year. Even iTunes is up to version 8. In other words, don’t keep flogging the same damn album, working another single, but build off the album and make new singles.

And you don’t know what the public wants from the get-go. Speak to Eddie Rosenblatt. Sure, Fleetwood Mac with Lindsey and Stevie made a radio-friendly record, but who knew that Stevie Nicks would develop into a twirling witch on stage?

You start, but you can’t plan the future. It evolves.

But it hasn’t been that way for a long long time. Marketing’s been king since the days of MTV.

Don’t worry if your track is radio-friendly, most hard core fans don’t listen to terrestrial radio.

Don’t worry if your act is good-looking, videos are now just a peek at what the act looks like, akin to a photo in a magazine, as opposed to mini-movies.

Know that cookie-cutter will deliver diminishing returns. Unique can blast you into the stratosphere.

Movies have an advantage. Each and every one is new. So you can pull the wool over the public’s eyes again and again. But it’s hard to convince the public that the "American Idol" contestant is now credible. You’ve got to guard your image.

It starts with the music. That’s the driver today.

And the music is just the beginning. Don’t worry if the music is free, don’t worry about monetizing the music. Just get it in people’s hands, make it available!

Radio used to perform this function. People tuned in. Now there’s too much music and most people aren’t listening, so to charge for the tunes is a mistake. You need the public to take you on a ride. How many people would have watched the Susan Boyle video if it cost 99 cents a viewing?

Ultimately, pricing is irrelevant if there’s desire. You’ve got to build that desire. And what sells in today’s world is authenticity. And difference. Where are the new acts that are authentic and different?

And different today means sans tattoos and drum machines. It means melodies and good voices. Rather than driving deeper into the niches, throw a broad lasso by basing your product on these fundamental values. Not that you have to. But if you go niche, expect to stay niche. That’s the flaw in the thinking of those who support indie rock. They think these indie bands will blow up. But they can’t. Because there’s not that imprimatur, that radio and television exposure that made R.E.M. ubiquitous, that even gave Marilyn Manson a chance. If you start way off the radar, expect to stay way off the radar.

Unless you’re not stylized, but good.

Yes was respected for its members’ skills. Jon Anderson had a pretty voice. Therefore, their left field music could suddenly cross over. Whereas a band with bad voices and sketchy playing will stay left field.

We can discuss this over a cup of coffee. It’s very complicated, and you’re getting pissed off, coming up with exceptions.

The bottom line is don’t expect your favorite to be mainstream unless it’s got mainstream qualities. Elements that appeal to a vast quantity of people.

But, the caveat here is no one can predict the future. And mainstream is wider than the industry presently perceives it to be.

So you start somewhere and go on an adventure, not knowing exactly where you’re going to end up. Chances yield results. If someone says no, you’ve got to say yes. You’ve got to have enough rough edges to hook people, but not be so offensive as to alienate them.

We’re starting all over again. We’re building music anew. And everybody with power today doesn’t give a shit. Because starting means no revenue, no commission.

And those starting looking for an investor are barking up the wrong tree. Because these investors want returns, and only know how to do it the old way.

It truly is a D.I.Y. world. Mellencamp doesn’t get that the same way Maureen Dowd doesn’t get Twitter. Their years on the planet are clouding their eyes.

Start small, grow big. The eighties and nineties were an anomaly, when we all paid attention to MTV and Top Forty radio. The world has splintered. Music can unite it. But you’ve got to start with the music itself.