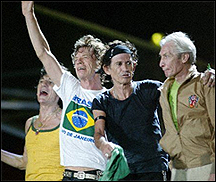 LOS ANGELES (CelebrityAccess MediaWire) — As if the music biz needed another reason to love their “CrackBerries,” the phone’s maker was supposed to produce a batch bearing the logo of the legendary Rolling Stones.

Research In Motion Ltd. was sued May 11th by Los Angeles-based RST (2005) Inc., a company representing the band, claiming it failed to live up to a 2005 contract to make the Stones-branded BlackBerry wireless phones.

“RIM failed to produce any Rolling Stones branded wireless telephones, as contemplated by the license agreement,” RST said in its complaint, according to the Wall Street Journal.

RST claimed unspecified damages for breach of contract from the Waterloo, Ontario-based Research In Motion Ltd. –by CelebrityAccess Staff Writers