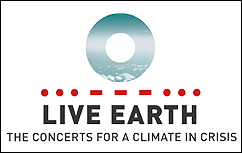 The trio teamed up in 2005 to successfully mount the celebrated WaveAid tsunami benefit concert in Sydney.

Live Earth promoters have worked closely with Australian government officials to include the price of public transport in the ticket price for the event. This includes travel to and from the event on CityRail trains, special event buses to and from Central Station and Moore Park, and on standard Sydney Buses and Sydney Ferries' services. Including the cost of public transport in the ticket price will ensure that the environmental impact caused by getting the crowd to and from the show will be kept to a minimum. Organizers will encourage all concert attendees to use the public transport supplied. –by CelebrityAccess Staff Writers