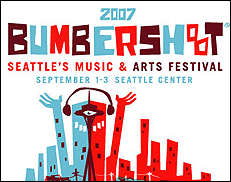 SEATTLE, WA (CelebrityAccess MediaQire) — One Reel, the independent not-for-profit producer of Bumbershoot, has named Samsung as the title sponsor of the festival's Mainstage. The 2007 Bumbershoot: Seattle's Music & Arts Festival will take place over Labor Day weekend at Seattle Center.

"Samsung is proud to be a sponsor of such a premier music event with top name talent that reflects the leadership and cutting-edge design that Samsung brings to mobile phone technology," said Johnny Hart, vice president – general manager Strategic Accounts. "This sponsorship comes at a time when mobile phones are converging and being used more and more as music players, cameras and other electronic devices."

Samsung will activate its sponsorship through creative pre-event retail promotions and also plans to entertain thousands of employees based in the Seattle market at the event. "Samsung and Bumbershoot each have a legacy of being leaders in bringing to the public the best in their respective fields," said Heather Smith, Bumbershoot producer. "The Samsung Mainstage sponsorship is a natural match for Bumbershoot, and we are thrilled to be working with them."

One Reel recently inked a five-year collaborative deal with AEG Live to use its industry resources in the areas of major music talent booking, national sponsorship and underwriting of Bumbershoot. — Jane Cohen and Bob Grossweiner