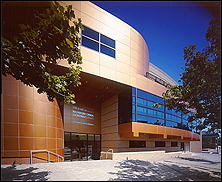 All but three of the eight Broadway-style touring productions Baci had planned for the Lyric between last September and this May were canned, leaving ticket holders in the cold and destroying theater profits.

The Maryland attorney general’s office has received 77 complaints about Baci. Theaters in Washington and Virginia were also affected.

“It’s very unfortunate,” Richmond told the Baltimore Sun. “We’re doing whatever we can to work with the patrons who have been affected.”

The paper reports that Baci’s bankruptcy papers list more than 200 creditors, and reports about $290,000 in assets and $4.9 million in liabilities.

Embattled Baci President Nicholas Litrenta has been basically missing for months, refusing to be contacted for interviews or business dealings.

Court records in Baltimore show more than 30 lawsuits over unpaid bills filed against Baci and company president Nicholas Litrenta’s other companies over the past five years. A 2006 case about an unpaid loan resulted in a judgment of more than $300,000 against Litrenta and Baci.

In 2003, Litrenta joined forces with controversial promoter Jack Utsick, who’s Worldwide Entertainment and Jack Utsick Presents companies are currently in receivership as part of a settlement with the Securities and Exchange Commission, creating a new theatrical company, Baci/Worldwide.

Marks Chowning, a VP of Live Nation, which operates Washington's Warner Theatre, another venue affected by Baci's canceled tours, said the bankruptcy filing is “not surprising given what we know about the current situation.”

“That's quite a few complaints in a short period of time,” said Raquel Guillory, a spokeswoman for the attorney general, according to the Sun. “Whenever a company files bankruptcy, that means there are most likely very few, if any, assets left to pay their creditors, and of course that reduces the likelihood that consumers will get some, if any, relief. But we will continue to work on these cases.”

Bankruptcy trustee George W. Liebmann said there are roughly 300 consumer deposit claims (primarily from ticket holders), amounting to about $109,000 in the Performing Arts Production filing. He said he expected those claimants to receive notices, including claim forms, from the bankruptcy court within 15 to 20 days.

Ticket holders “probably will get something, but it will probably be a year down the road before they do,” Liebmann said, according to the Baltimore Sun. “I couldn't even estimate what they will get because it depends on the number of claims and the number who bother to file them.” In the meantime, he advised Performing Arts patrons to “sit tight.” –by CelebrityAccess Staff Writers