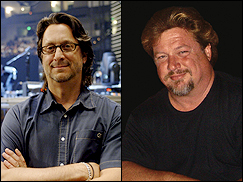 Smith has been appointed to the position of Chairman Live Nation San Francisco and Denver. In his new position he will oversee all concert operations in the San Francisco, Sacramento, Reno and Denver markets.

Most recently Mr. Smith served as President of Live Nation Northwest. Prior to that he held several positions at Bill Graham Presents, including Senior Vice President of Business Development and Senior Vice President of Booking. Over the years he has booked thousands of shows, produced the first national Lollapalooza concourse activities in 1991, produced the first Tibetan Freedom concerts in Golden Gate Park in 1996, was involved in the development of the Fillmore Auditorium in Denver and produced the Farm Aid concert in Seattle in 2004. He is also responsible for producing the annual Bridge School benefit concert with Neil and Pegi Young and has worked with such artists as Tom Waits, Nirvana, Pearl Jam and other performers on a myriad of other benefit events.

Zelisko has been promoted to the position of Chairman of Live Nation Phoenix and will continue to oversee all concert operations in Arizona, New Mexico and Las Vegas. He most recently served as President of the region.

A concert promotion veteran of more than 30 years, Mr. Zelisko’s first show was in 1974 with Herbie Hancock and the Headhunters. He went on to establish Evening Star Productions, which presented a diverse range of events including festivals, concerts, theatre and corporate events. With Mr. Zelisko’s reputation spanning four decades, he has worked with such artists as Grateful Dead, Santana, Tina Turner, Bon Jovi, Ozzy Osbourne/Ozzfest, Paul McCartney, Pink Floyd, The Eagles, KISS, The Rolling Stones, Stevie Ray Vaughn, Eric Clapton, Cher, Scorpions, and hundreds of others. He sold Evening Star Productions in 2001 to SFX Entertainment. In 2005 he was inducted into the Arizona Music and Entertainment Hall of Fame.

“Lee and Danny’s contributions to Live Nation and to the concert business as a whole are legendary,” said Live Nation North American Concerts President, Jason Garner, in a statement. “Over the years, both gentlemen have nurtured incredible staffs who are the future superstars of our business. Their leadership has been exemplary and I’m happy they will continue to work on the Live Nation team for years to come.”

The company announced several other important promotions in these markets as well.

Rick Mueller has been promoted to the position of President of Live Nation San Francisco. In his new role Mr. Mueller will run day-to-day concert operations in the San Francisco, Sacramento and Reno markets. Most recently serving as Senior Vice President of Booking, Mr. Mueller joined the company in 1997 as an assistant in the booking department. He has helped develop the growth of annual festivals such as the Vans Warped Tour and artists such as No Doubt, John Mayer, and A.F.I.

Perry LaVoisne has been named President of Live Nation Denver, running day-to-day concert operations in the Denver market. Prior to this position Mr. LaVoisne served as Vice President of Booking at Live Nation Detroit. He was a partner in Ritual Inc., a Detroit-based concert promotion company acquired by SFX in 2001. Mr. LaVoisne began his career as a bartender and then manager at St. Andrews Hall, a local Detroit club.

Terry Burke has been named President of Live Nation Phoenix and will run day-to-day concert operations in Phoenix, New Mexico and Las Vegas. Most recently serving as Senior Vice President of Booking, Mr. Burke began his career at Evening Star Productions in 1982. He has a business and Law degree from the University of Arizona.

“These promotions represent our overriding commitment to continue to build an unparalleled North American concert network staffed with the very best in the business,” said Mr. Garner. “These executives have distinguished themselves by providing artists with a superior model to reach their local fans.”