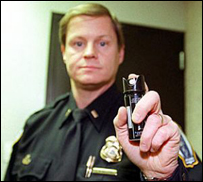 ARLINGTON, TX (CelebrityAccess MediaWire) — Pepper spray was used to quell a melee during an All Time Low (ATL) performance during a Bamboozle date at Six Flags Over Texas on May 31st.

According to the Fort Worth Star-Telegram, the melee– involving 20-25 teenagers–broke out during ATL's set when the band reportedly began inciting the crowd.

"The cause of the altercation appeared to have been because the band had been throwing articles of clothing into the crowd and fans were rushing to the stage and tussling over those items," an Arlington Police spokeswoman said in a statement.

An off-duty Arlington police officer, working as security at the park, responded to a request for aid from other park security officers and used pepper spray on one individual who refused to stop grappling over a baseball hat. Others nearby were affected by the 'cast off' from the spray, leading numerous people requiring treatment at the scene to relieve the effects of the pepper spray.

The Arlington police department noted that a use-of-force review would be conducted for the incident. – CelebrityAccess Staff Writers