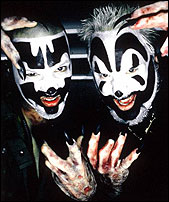 DENVER (CelebrityAccess MediaWire) — Two concert-goers were stabbed outside of an Insane Clown Posse show at the Fillmore Auditorium, leaving one of the two men in critical condition.

According to the Denver Post, the stabbings resulted from a fight at a Wendy's near the venue. The suspect stabbed one of the victims in the parking lot and pursued and stabbed the second victim, who had attempted to flee from the scene. Both of the men had been on their way to the ICP concert and the stabbings occurred shortly before the concert was set to begin.

The second victim, originally listed in critical condition as well, has been upgraded to serious condition.

Police have arrested a suspect in connection with the stabbings but due to the continuing nature of the investigation, they have not released a name for the suspect. Prior to the arrest, police were reported to be seeking an individual wearing white pants, a white shirt and face paint, suggesting that the suspect was also on their way to the concert. – CelebrityAccess Staff Writers