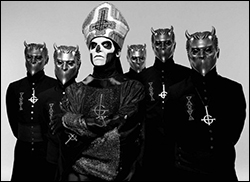 (Hypebot) – In this piece Glenn Peoples looks at hard rock and metal's roll in the industry, for although the style of music has little to no prevalence on commercial radio, new tracks are gaining popularity on streaming services like Pandora.

Two hard rock bands, one young and one old, walk into a bar. The bartender asks to see the older band’s ID. “Welcome,” she says. “I loved your music when I was a college student in the 90s.” The younger band hands the bartender its ID. “Sorry,” she says, fiddling with the knob on her FM radio, “you’re far too young to be in here. Go get a few radio hits and come back in a decade or two.”

Such is the dilemma for young hard rock and metal bands. Radio has all but turned its back on the hard rock and metal stars of tomorrow. It’s a shame. Radio has remained the most common source of music discovery, according to numerous surveys over the years. The old-fashioned format is tied with friends/family at 68 percent, according to Edison Research and Triton Digital. Where do fans of metal and hard rock go for new music? Not commercial radio. Metal, and its umbrella genre, hard rock, has become a format for the middle-aged listener. People wanting to find new, hard music will find what they’re looking for at Pandora.

But hard rock and metal do well at Pandora, a democratic platform that rewards songs for their listeners’ positive reactions, not the decisions of radio program directors. Metal, a sub-genre of the more popular rock category, is tied for 13th in monthly time spent listening and currently gets over 6 million unique listeners per month. Rock, which includes hard rock and other types of rock music, has the most monthly listening hours on Pandora, ranks 2nd in monthly time spent listening and gets 50 million unique listeners each month.

The numbers show the severity of hard rock radio’s problem. According to Nielsen BDS data, only 10.5 percent of hard/active rock stations’ playlists are current tracks while 82.9 percent are legacy/golden tracks and 6.6 percent are recurrents (“active rock” stations have an emphasis on hard rock, “recurrents” are former current songs that still get spins). For comparison, current songs are 85 percent of music played at both pop and rhythmic (a catchall spanning upbeat rhythmic pop, hip hop and upbeat R&B) and 68 percent at country.

A side-by-side comparison shows Pandora’s appeal for metal fans. Two thirds of Pandora’s 30 most popular metal songs have no spins at a panel of monitored radio stations that lean heavily toward hard rock and metal. This list of artists includes True Widow, Lesbian, Charred Walls of the Damned, High Spirits, Skeleton Witch, Salem’s Pot and Wode, up and coming bands that are far from household names. The songs with meaningful number of spins — more than 100 or so per week — includes “Square Hammer” by Ghost B.C., a Swedish heavy metal group signed to Loma Vista Recordings, the label founded by A&R exec Tom Whalley that’s part of Concord Music Group. Last week, “Square Hammer” is currently #29 on Billboard’s Mainstream Rock National Airplay char and #8 on Pandora’s metal top 30. Veteran groups Anthrax (represented twice) and Meshuggah also make the list. The 26 lesser-known artists popular with Pandora have received zero or near zero spins at commercial hard rock stations.

Few of the bands in Pandora’s top 30 have ever received regular airplay at active rock. None of the top 10 songs on Pandora’s “New Rock” station is currently in the top 25 songs on the Active Rock broadcast chart. On Pandora’s “New Metal” station, the most popular song that receives airplay is “I. The Planet” by Norma Jean,” heard almost exclusively at Christian radio airplay, and “Square Hammer,” which last week was #29 on Billboard’s Mainstream Rock National Airplay chart.

And while metal is relatively popular at Pandora, there’s still room for improvement at Pandora. Metal accounted for 4.0 percent of US album purchases in the first half of 2016, according to BuzzAngle (track sales and streams were converted into albums for this metric). Yes, metal fans are dedicated album buyers but they’re getting into streaming. Metal’s share of listening hours at Pandora is currently about 1.5 percent. The 2.5 percentage point spread is indicative of the opportunity to attract metal fans’ attention that isn’t being satisfied by radio.

Active rock radio’s risk aversion has pushed playlists to the safety of music from the ’90s and ’00s. Well known names like Disturbed, Slipknot, Korn and Red Hot Chili Peppers dominate playlists and squeeze out the hard rock and metalcore preferred by today’s young audience. There are a few theories why that has happened. One issue is the long, difficult slog faced by active rock songs. A Jacobs Media Strategies survey found the average active rock song takes months for a new song to gain get established, requiring radio stations to remain faithful to a song until it resonates with listeners. In comparison, country, which has a reputation for lengthy promotional cycles, sees a new song get established in just a few weeks. But there are “more barriers to making hits in active rock — and more [portable people] meter punishment for a bad risk — than in any other format that relies on new music,” according to Fred Jacobs of Jacobs Media Strategies.

Radio expert Sean Ross has noticed commercial radio’s inability to graduate “post-Linkin Park hits to CHR,” or contemporary hit radio, otherwise known as top 40 or pop radio, he explained in an article last month. At the same time, the common strategy of starting songs at alternative radio means an alternative hit “can be tagged with ‘too weird/not rock enough’ for active rock.” (This helps explain why the Hot 100 is devoid of rock songs.)

A promotional email by the band The Amity Affliction sums up the state of active rock. The band’s single “All Messed Up,” from an album released on Roadrunner Records, was having a difficult time getting radio play even though, as the email proclaimed, it was “outselling and out-streaming half the records on the active rock chart.” The point was clear: there’s a disconnect between what people are streaming and what active rock programmers are spinning. Broadcast radio is too slow to adapt and incapable of matching streaming’s diversity and depth. But at Pandora, to borrow a song title from Night Ranger, you can still (hard) rock in America