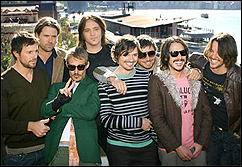 SYDNEY, Australia (CelebrityAccess MediaWire) — Immensely popular Australian rock groups Powderfinger and Silverchair have announced that they will co-headline a national tour, in what is being billed as a “must see” event for Australian rock fans.

The “Across The Great Divide Tour” will pair the country’s two most popular rock bands, playing shows in every capital city and 14 regional centers, using a big-top tent where venues aren’t large enough, beginning in late August.

Powderfinger and Silverchair share the record for most ARIAs (Australian Recording Industry Association awards) won by an Australian band, with 14 each.

Tickets for the massive tour go on sale July 9. –by CelebrityAccess Staff Writers