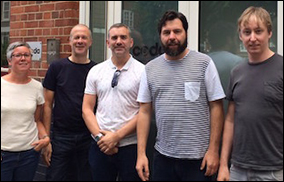 
Parker, who will be based in Coda’s London offices, has been at WME since 2007 – before which he ran Concorde International Artistes.


Parker brings with him a roster of acts that includes include Take That, The Prodigy, Cheryl Cole, Matt Corby, Haelos among others.

Solomon Parker said, “I am excited to be joining what I consider a fast moving and dynamic company who, over the last few years, have garnered a reputation for breaking acts that is second to none.


“Between the partners there they have created a fantastic culture and following their recent far-reaching partnership with Paradigm Talent Agency in the U.S. they are now perfectly placed to deliver a bespoke service to their clients that is second to none.


“Coda put their artists and managers front and centre of everything they do and I’m very much looking forward to being a part of it.”


Claire Horseman, Managing Director of Coda Music Agency said, “Bringing someone of Sol’s standing into the Coda team further demonstrates our ambition to continue building a world class agency. His experience and reputation in the industry are second to none and he will add real value to our overall offering.”


“I think Cris left with Solomon’s dad’s car and I took a tankful of terrapins. Solomon’s dad and those early days at Concorde were very influential to my career.


“It’s great that Solomon, Cris and myself are back under one roof, along with Tom Schroeder, James Whitting, Rob Chalice, Nick Matthews, David Exley, and Paul Buck plus the multitude of younger agents and bookers.


“We represent acts as diverse as Take That, Prodigy, Bastille, Disclosure, Ellie Goulding, The Libertines, Jess Glynne, Years & Years , John Newman, The xx, Jake Bugg and Emeli Sande. That’s just a short list from the top of my head – but what it also represents is that exciting times are ahead of us.


“Anyway I am not sure where Cris left the car and the terrapins died, proving that agents are the most durable of the reptile species.” — According to Music Business Worldwide