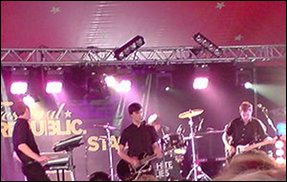 LONDON (CelebrityAccess MediaWire) — London’s White Lies made a major splash with their dark and enigmatic 2009 debut, To Lose My Life, and have announced their sophomore record Ritual, set to hit on January 18, 2011 via Geffen/Fiction.

Produced by Alan Moulder, Ritual will marry dancefloor beats with "raging guitars and everything in between," according to the press release. British critics have given White Lies accolades as successors to the likes of Echo & The Bunnymen, The Teardrop Explodes, Depeche Mode, The Psychedelic Furs and Magazine  and have called lyricist Charles Cave a “classic doom-rock dreamweaver; Nick Cave meeting Edgar Allen Poe.”

The album's first single, “Bigger Than Us” will be available digitally on November 22.

The childhood friends from West London, Harry McVeigh, Jack Brown, and Charles Cave, played at Coachella and Lollapalooza and found themselves performing on the Late Show with Letterman and Jimmy Kimmel Live.

White Lies have spent the past two years on the road playing both headlining sets as well as supporting slots with artists like Coldplay and Kings of Leon. After a recent gig opening for Muse this past September at Wembley Stadium, White Lies returned to US shores for the first time in a year with a headlining set at Filter's Culture Collide Festival in Los Angeles.