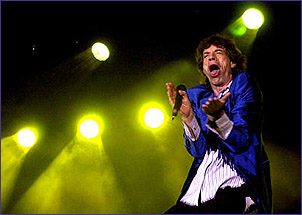 The Rolling Stones failed to sell out their first ever concerts in India – amid reports that many young music fans are simply not interested in them.

The band played in Bangalore on Friday and in Bombay (Mumbai) on Monday as part of their Licks World Tour.

The Stones have already performed 50 sell-out concerts in the US and eight in Australia.

They brought forward their Indian tour by almost a week after cancelling concerts in Hong Kong because of the Sars illness sweeping the Far East.

Despite reports of great excitement about the Indian concerts, tickets for both shows remained unsold.

"I am not tuned into Rolling Stones but I came here to experience the stage performance of Mick Jagger," hotel employee Desh Niranjan said.

"On the one hand I do not understand their type of music and I listen to Metallica and other rock bands. It is to see their skills that I came here for."

Lawyer N Sandeep, 26, said: "It is one of the greatest bands I have heard of but not listened to. It is great to experience the atmosphere."

The band's China shows were cancelled in the Sars health scare.

Another young music lover, Chris Avinash, said the Stones had not received exposure in India like other acts such as Pink Floyd and Dire Straits.

"You should understand that most of the young generation has not been brought up on a Stones diet," he said.

The shows involve digital plasma screens relaying footage from the stage, along with a 240,000-watt sound system, special effects and hundreds of mobile lights.