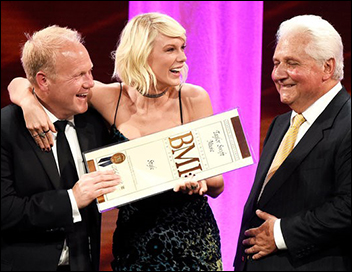 
Taylor Swift was presented with the first-ever Taylor Swift Award, a special award bearing her name in recognition of her incomparable creative and artistic talent and influence on music lovers around the world. This is only the second time in BMI’s 76-year history that the company has presented an award in someone’s name. The first was to Michael Jackson in 1990.


The lyricist also took home the BMI Pop Songwriter of the Year title once again for penning four of the year’s most-performed songs from her hit album 1989; “Bad Blood,” “Blank Space,” “Style,” and “Wildest Dreams.”

Songwriters, Barry Mann and Cynthia Weil were awarded the BMI Icon Award for their contributions to the craft of songwriting. The SoCal VoCals, University of Southern California’s premiere acapella group, paid homage to the songwriting team with a musical tribute. The talented vocalists performed a medley of Mann and Weil’s most iconic songs including “We Gotta Get Out Of This Place,” “Just Once,” “You’re My Soul and Inspiration,” “On Broadway,” “Somewhere Out There,” and “You’ve Lost That Lovin’ Feeling.”


Throughout the evening, the 50 best performing songs in BMI’s catalogue were named leading up to the announcement of the BMI Pop Song of the Year. Jeff Bhasker, Devon Gallaspy, Trinidad James, Mark Ronson, Lonnie Simmons, Rudy Taylor, Charlie Wilson, Robert Wilson and Ronnie Wilson shared that honor for their Grammy-winning hit “Uptown Funk.” Sony/ATV Publishing claimed the prestigious BMI Pop Publisher of the Year crystal with 23 of year’s most performed songs.