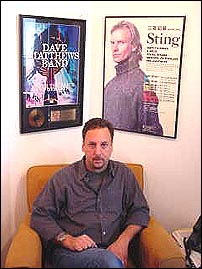 Ted is a 15-year veteran of the music industry and a longtime Boulder
resident. His hard work paid off with great success in managing indie rock
perennials, The Samples, as well as folk diva Sherri Jackson. In addition he
has worked along side many artists over the years including Sting and Dave
Matthews. Until Recently, he was partners with Rob Gordon at What Are
Records?/AtSource Distribution Marketing – a Boulder-based record label and
distribution company catering to talented career artists.

Before graduating from the University of Colorado Business School with a
Bachelor's Degree in Marketing, Ted was Director of the CU Program Council
in 1984 and 1985. Program Council provided his introduction to the music
industry as he brought R.E.M., The Smiths and Van Halen to the Boulder
campus, among others.

In 1987, Ted moved to New York City where he worked for the prestigious
Frontier Booking International as an assistant booking agent. Six months
later he was hired by Kim Turner, at KRT Management, one of two personal
managers for international superstar, Sting. In 1990, Ted brought The
Samples to KRT, whom he co-managed with Mr. Turner until 1993. At that time
he took over full management of The Samples and returned to Boulder,
Colorado where the band was based. Before leaving New York, however, Ted
worked with former EMI A&R exec. Rob Gordon to create What Are Records?,
which became the band's record company for many years. Together, they took
the band from a local Boulder success story to national prominence selling
over a million records for the group.

Ted and The Samples were well known for taking developing artists at the
time, such as the Dave Matthews Band and Lisa Loeb, under their wing.

In 1999 Ted was made Talent Buyer for Clear Channel Entertainment in
Denver, and promoted shows in a variety of venues from the Fox Theatre to
Red Rocks Amphitheater. Ted booked a series of nearly 50 sell-outs during
his tenure at Clear Channel.

In October 2000 Ted reunited with Rob Gordon to become General Manager
and Vice President of A&R for What Are Records?/At Source Distribution.
At-Source provided retail and internet record distribution, as well as
marketing services and promotion for numerous career artists, such as Maceo
Parker, Glenn Tilbrook and David Wilcox

Since 1985 Ted has cultivated many strong relationships in the business
working with both artists and industry professionals, and looks forward to
expanding those relationships in his new role as Director of Business
Development for CelebrityAccess. Ted will be responsible for marketing the
CelebrityAccess product worldwide.

Peter Denholtz, CEO of CelebrityAccess, said, “We could not be more excited about Ted coming on board. His experience, coupled with the relations that he has developed over the last 15 years, will make a significant and immediate impact in helping CA attain its goals.”