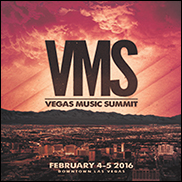 LAS VEGAS, NV (CelebrityAccess) – The annual Vegas Music Summit (VMS) is set for February 4th and 5th in Fremont Entertainment District of Downtown Las Vegas. This music & media conference and festival showcases prominent emerging artists and give a forum for industry experts to share insight on a diverse range of relevant topics.


Often compared to being an smaller version of “South By Southwest,” VMS gives guests shoulder-to-shoulder access with industry executives, artists and two days of industry networking. VMS has been the home of breakthrough performances by groups like Imagine Dragons, Hot Water Music, AWOLNATION, Otherwise, and more. Many of the participating artists who performed at VMS garnered early industry attention, and in some cases secured record or production deals. Guests have left with insight that provided a springboard for next level industry opportunities.

The VMS industry panels will be held Thursday (2/4) and Friday (2/5) at the Downtown Grand Hotel & Casino, which is the new host for the event in 2016. Each panel will include discussions on today’s music industry. Key subjects of discussion will include social media, touring, licensing, legal, music production and more.


Music showcases will be held both nights and featured artists will be announced throughout the month via the official VMS website and Social Media. – Staff Writers