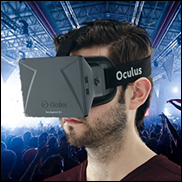 LOS ANGELES (Hypebot) – While the majority of VR content has, up to now, been focused on games and films, UMG and iHeartMedia have major plans in the works to release several VR concerts in the coming year.


There's no doubt that virtual reality will be a hot item this year, but so far most of the attention of VR content has been around games, and to a lesser extent, movies.


Universal Music Group (UMG) believes that VR extends to music as well, and has teamed with online radio giant iHeartMedia to create a series of 4 virtual reality concerts in the upcoming year.


Indeed, VR and music seem like they're made for each other, especially when coupled with an immersive audio technology like binaural or 3D headphone surround. That said, UMG's shows are very much in the planning stage, and few firm details have been revealed except that the shows will be shot at the iHeartRadio Theater in Los Angeles later this year.


In addition to the 4 full-length shows, UMG will also shoot at least 6 short-form "experiences," presumably music videos, in VR throughout the year.


The first attempt at a VR showcase apparently will be the iHeartRadio Music Awards on April 3rd, but other events thought to be in contention include iHeartRadio's Country Festival, Summer Pool Part, Fiesta Latina, Music Festival and Jingle Ball Tour.


iHeartMedia is a perfect partner for UMG in that it has around 245 broadcast listeners and another 90 million online each month.


Although I predicted that virtual and augmented reality headsets would set Christmas on fire, it appears that projection was a little premature – but not by much. Look for VR to be the next killer app for both audio and picture this year.