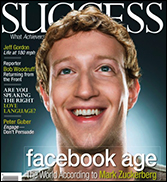 It's all about the pivot.


Once upon a time Facebook was a place to connect with your friends.


Now it's where you go for information…news, video, even music video.


How did this happen?


Forget that he's younger than so many of his established competitors. What's amazing about Zuckerberg is he's willing to admit he's wrong and change course and constantly improve his product.


Google is still relying on desktop search. The company has not figured out how to transition to mobile.


Today it's all about staying two steps ahead and changing when something doesn't work.


Facebook's initial mobile play didn't work, Zuckerberg threw out the HTML5 code and started all over.

You never double-down on a loser. That's what the techies have over the musicians. When musicians do something with little traction they keep imploring us to pay attention. If no one pays attention to the work of the techie, he changes it. Because no amount of marketing can sell that which the public does not want. You start with the marketing, and then word of mouth sustains you. If you've got no word of mouth, change.


We live in an era of chaos.


Zuckerberg is trying to deliver comprehension.

That's what Facebook's news play is all about. Turns out people don't want to go to individual news sites for information, they want it all in one place. So, the "New York Times" is hurting, even with its soft paywall. Its goal is to get those already paying to pay more, which is positively fatuous, it's like an indie bookstore trying to get fat cats to donate to ensure their survival. You don't bleed those already invested, you find new customers, or you pivot. Facebook has cornered the users, that's what it's delivering to news outlets. It's the old portal paradigm, but with a lot less investment.


Same deal with video. Video is sweeping up the internet, with the prevalence and cheapness of bandwidth. That's what people want, so that's where Zuckerberg is going. And the most watched videos on YouTube are music, which is why Zuckerberg is interested in featuring those.


And then there are the investments.


Better to buy your competitor than imitate them. If only Apple had learned this.


But analysts believe those who've won in the past will win in the future. That's contrary to the history of computing. Where are Borland, Osborne and Palm today? You either sell your standalone product to be integrated into a larger one as a feature, or you pivot into something else. That's right, if you made spellcheckers in the 80s, you could see the handwriting on the wall, eventually Microsoft would make spelling a feature in Word, you had to sell out or diversify.


And the purchase of WhatsApp…

America is so myopic. The Street has finally realized China buys iPhones, but the truth is the world is vast, and outside America WhatsApp triumphs, it's a phenomenon. Will Facebook ever get a return commensurate with its outlay? That's unclear, but the truth is it annexed something that was threatening its underpinnings. People want to communicate, they don't have to do it on Facebook.


So, Zuckerberg keeps investing and expanding, when the music business famously contracted. When times are challenging, that's when you invest.


Furthermore, the music industry has yet to pivot.


Who cares if people pay for music? That's no longer the dominant revenue stream. No one's gonna pay a hundred bucks a month to streaming tunes, but they will pay that for a concert ticket. The goal is to gain critical mass and then monetize, the whole charging for streaming is a sideshow. It's about building acts and then profiting from them on the road and with sponsorships and endorsements.


But the musicians are too stupid to know this.


And the executives can't see far enough into the future.


Sure, more people will pay for music when it becomes easier to use and cheaper, price and convenience are everything, but we haven't hit the tipping point yet. Spotify eradicated piracy. That's a monumental step. Getting people to pay is coming.


But not everyone will.


So what is your goal?


Zuckerberg realizes it's about lassoing the largest audience and keeping it in his ecosystem. It's fine if you can milk your small fanbase to stay alive, but the profit, the money you want, is in mass. Which is why everybody in music is going for mass.


Which will leave a lot of acts out, sorry.


But I'm willing to see the future as different from today.