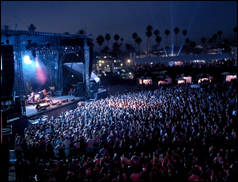 "The company was faced with unprecedented and inconsistent governmental and bureaucratic obstacles created by the City of Santa Barbara that could not be overcome in promoting the 4th annual West Beach Festival this past September. Coming off of a spectacular 2009 festival that had tens of thousands of attendees, and produced much needed tax dollars, the City of Santa Barbara notified Twiin Productions that the 2010 festival would not be permitted. No valid reason was ever given for this disparate treatment. Of course, this decision was overturned, allowing the festival its permit. The City of Santa Barbara subsequently declared the issuance of that permit would be contingent on new, conflicting, financially impossible and unsupported demands causing the end of the process to be a perpetually moving target. By severely restricting the time for compliance, and costs associated with actually releasing that permit, the business could not find financial success."

While a full list of creditors was not included in the bankruptcy filings, Twiin productions reported that after their exempted property and administrative costs for the bankruptcy are paid, it is unlikely there will be any funds remaining to make creditors whole.

The 2010 return of Twiin Production's West Beach Festival ran into trouble early on with the city. The 2009 festival was plagued by unruly festival-goers as well as noise and parking complaints, prompting permit troubles for the 2010 event and an eventual move from their original location to a more modest location in a city park. – CelebrityAccess Staff Writers