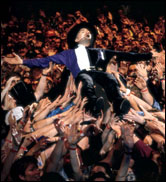 LAS VEGAS, (CelebrityAccess MediaWire) — Garth Brook has announced a new round of dates for his Las Vegas residency at the Encore Theater at the Wyn Las Vegas.

Brooks played the first round of dates to sold-out crowds and strong reviews, starting in December of 2009 and running through last August. Tickets are fairly spendy and are set to go on sale on November 13th for $225, which works out to $253 with taxes and service charge. This marks a substantial price bump from the previous round of dates, which were priced at $125 with $23 dollars worth of taxes and fees.

"My decision to raise the ticket price was a simple one. The demand for Garth was so overwhelming that it caught us by surprise. We could fill a theater many times the size of this, twice a night.

"The most important thing for our company is to give people value for their entertainment dollar. The contact with Garth Brooks in the Encore Theater is the equivalent of being in his living room. When the greatest live performer of our time appears in such an intimate theater, the seats should be priced at least competitively with other great Las Vegas entertainers. In terms of value, I believe that Garth Brooks is still under-priced and represents the greatest entertainment value in modern Las Vegas." Steve Wynn said, in a statement.

Brooks played the price increase down, saying in a statement: "I am flattered Steve Wynn believes in me as an entertainer and my deal with him is not affected by ticket price. My only concern is the audience. Right now, the Vegas audiences are some of the best I have ever played for and I'd hate to see that change for whatever reason."