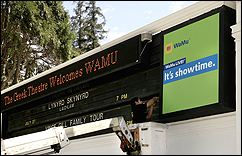 “WaMu LIVE! is a simple, meaningful and free benefit that taps into our customers’ enthusiasm for the arts and entertainment,” said Steve Rotella, WaMu’s president and chief operating officer, in a statement. “We continuously strive to bring our customers value. The combination of online and on-site benefits of WaMu LIVE! delivers a unique 360-degree entertainment experience.”

By flashing any WaMu debit, credit, ATM or home equity card, customers can enjoy special WaMu entrances, access to venues before doors open for shows and access to premier parking.

“WaMu is a different kind of bank. While we’re serious about banking, our brand is also about making it simple and making our customers smile,” said Jane Zalutsky, first vice president of experiential marketing for WaMu. “Now, instead of saying ‘I’m with the band’ to get rock star treatment, our customers can say ‘I’m with the bank!’”

WaMu LIVE! offers customers access to the opportunity to purchase event tickets online, online contests for VIP experiences, e-mail alerts for upcoming events and promotions, and the ability to download and print personal photos taken in WaMu photo studio at the venues.

Washington Mutual is no stranger to the music industry, sponsoring more than 40 music events and festivals around the country. In 2005, the company became a major sponsor of the Jones Beach Summer Concert Series in New York, and in 2006 landed naming rights for the WaMu Theater at Qwest Field in Seattle. In May 2007, the company also obtained naming rights for the WaMu Theater at Madison Square Garden in New York. –by CelebrityAccess Staff Writers