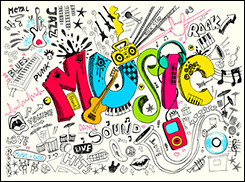 (Hypebot) – The controversy surrounding music streaming and artist compensation has been earning quit a bit of press lately. Still, the actual process of licensing, publishing, and compensating those involved in music publishing is complex and convoluted. This article offers a clear and detailed breakdown of exactly how music rights and payments work.


“I wish there had been a music business 101 course I could have taken.” -Kurt Cobain


If you write a song, you own that song. Maybe your record label owns a piece of your song in exchange for recording and distributing it. When your friend Andrew buys your song, the label gets a cut and you get a cut. The service it was bought from gets a cut, too. The more popular your music is, the more it gets used, the more everyone makes.


It’s a simple formula, and it’s how most of us think the music industry operates. In reality, this idea is quite inaccurate. Every song produced is a labyrinth of split ownership, licenses, and rights subject to decades-old laws spread across 100s of countries. They determine where a song can be played, how it can be used, and where the money goes afterward.


Calls for transparency and fair pay in the music industry have finally hit critical mass, capturing the attention of news outlets like NPR and building support for activism by stars like Taylor Swift. TIDAL was launched as an attempt to increase the amount of money artists are paid from streaming. Berklee College of Music released a 28-page report on its suggestions for repairing digital music. Everyone cares about music industry payments now.


It’s great news. But what about the next time you’re at a party and someone starts the “artists aren’t paid enough” conversation? How can anyone speak about music industry payments when they aren’t armed with all the information?


How does song ownership and payment really work, and can it be explained in a way non-industry experts understand?

On January 10, 1956, Elvis Presley recorded his seminal hit “Heartbreak Hotel” at RCA Studio B in Nashville. The moment the master tape stopped rolling, the genre-defining song became two main elements: a Sound Recording, and a Composition.


A song is made up of many pieces: lyrics, notes, structure, instrumentation, and melody. In copyright law, these intangible qualities that constitute a song are known as the Composition. When the composition is recorded, the recording of that composition is known as a Sound Recording. The sound recording is a “single acoustic event” of the composition that was put to tape. Two separate, uniquely important entities.


Making a sound recording from the composition grants special rights (called copyright) to the songwriters. Recording music, however, is a recent technological advance. It is not the only way to turn a composition into a copyrightable work. The intangibles of music also become a composition capable of being copyrighted the moment they are written down on paper.


We’ve been writing down musical compositions for a long time.1800 years before Elvis was lamenting his loneliness, an Ionian songwriter was penning the Seikilos epitaph in what is now Turkey. It is the oldest-known complete composition (notes and lyrics). By today’s copyright standards, it became a copyrightable composition at the moment it was inscribed in stone.

The Seikilos lyrics & melody (via Wikipedia)


Back in Nashville, the “Heartbreak Hotel” sound recording was also now a copyrightable work. Almost all artist-label contracts dictate the copyright in the sound recording is granted to the label. Copyright law now requires anyone wanting to use the actual recording of the song to obtain permission from the label.


Two distinct pieces of intellectual property (each with their own copyright rules) now existed for “Heartbreak Hotel:” (1) the composition, and (2) the sound recording.


Elvis has left the building. The lights on the 3-track RCA console have gone dark, and the 2" master tape reels have been taken to the factory, where they’ll be transformed into 7" vinyl records for sale. Multiple forms of intellectual property have been created. It’s time to start using them.


You might be surprised to know that Elvis didn’t write “Heartbreak Hotel”. It was written by Mae Boren Axton (aka “Queen Mother of Nashville”) and Tommy Durden. Elvis did manage to get a songwriting credit, but many believe it to be a vanity credit. These 3 songwriters are the technical owners of the composition. RCA Victor Records is the sound recording owner, and Elvis Presley is the performing artist for the sound recording.


Fast forward to 2015. You own a boutique digital streaming subscription service, one that serves exclusively Elvis music. In order to allow your listeners to press play on “Heartbreak Hotel,” you must obtain 3 different licenses:


•a license to use the sound recording (specifically, Elvis’ performance),

•a license to reproduce the composition (known as a “mechanical license”),

•and a license to publicly perform the composition (“public performance” constitutes any exhibition of the song — radio, live shows, or even on the speakers at Steak Shack).


Each license is an agreement to pay the rights holder an arranged amount of money for the use of their intellectual property. Obtaining these allows Elvis Music Service to run, but only for streaming on-demand. There are other licenses that are needed for other uses of music. For example, licenses also must be obtained to attach music to moving pictures (a synchronization license), and to publish a composition’s words and notes on paper (a print license).


Each of these rights is owned by a combination of Elvis, Axton, Durden, RCA, and various third parties (more on that in a minute). Each expect a portion of the money earned from the use of their contribution to the work.


In addition, every different kind of digital music use (streaming, downloads, radio, movies) requires various combinations of these licenses in order to be legal. Some licenses are even granted by copyright law (called “Compulsory Licenses”), with pre-determined royalty rates.


In short, using music for any commercial purpose requires a litany of license acquisition from the owners; and that doesn’t even begin to cover payment.

Paying labels for sound recordings is relatively straightforward. When the recording of “Heartbreak Hotel” is used, RCA Victor (now simply RCA) Records is paid for their ownership of the sound recording. Sound recording royalties are delivered on almost every use of a song.


Paying labels for sound recordings is relatively straightforward. When the recording of “Heartbreak Hotel” is used, RCA Victor (now simply RCA) Records is paid for their ownership of the sound recording. Sound recording royalties are delivered on almost every use of a song.


But what about the composers, lyricists, and songwriters? How do they get paid when their compositions are reproduced on CD, played on the radio, digitally streamed, or otherwise used? In our example, payment comes from mechanical licenses (for compositions), and public performance licenses.


In theory, the Presley-Axton-Durden trio could have managed the right to the composition by themselves and act as their own publisher. Acting as your own publisher can be time-consuming and confusing, so most songwriters and composers opt to be represented by a publishing company like Warner/Chappell, BMG Chrysalis, Kobalt, Sony/ATV, and others — companies that promote the composition and ensure songwriters and composers get paid when their compositions are used.