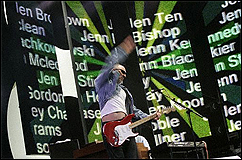 WASHINGTON (CelebrityAccess MediaWire) — The Parents Television Council is complaining about ABC’s broadcast of the Live 8 concert. The complaint was filed against Allbritton' s WJLA-TV Washington.

The PTC wants all the ABC stations that broadcast the July 2 concert fined because ABC didn’t censor all the profanity during the performance. Specifically, one phrase in “Who Are You” by The Who. ABC had the concert on a tape delay, so it got most of the bad words the rockers used that day while trying to help shed some light on African poverty.

So, wait, one inappropriate phrase? One phrase. That’s it? I’m assuming a lot more were caught in the tape delay because, well, because we're talking about performances by Velvet Revolver, Motley Crue, Snoop Dogg, Linkin Park, oh, well, the list could go on and on. And obviously, The Who. They are the real bad guys.

The PTC alleges that the ABC broadcast didn't edit the F-word out of The Who's performance of "Who Are You." Specifically, the line in question is the lyric "who the f**k are you," a line that has been aired countless times in its unedited form on radio stations across the nation since its release in 1978.

The phrase was only aired in the East Coast feed. It was edited out before the concerts were shown on the West Coast.

When asked why the lyric is all of a sudden offensive after 27 years of radio broadcasts, PTC Executive Director Tim Winter told the FMQB, "it's a great question," but the PTC is more concerned with television than radio. Citing the FCC's ruling that Bono dropping the F-bomb during an NBC broadcast of the Golden Globes was indecent, Winter contends that even though The Who lyric has been broadcast undedited on the radio, it "doesn't allow it to violate the law" and he felt that the Live 8 airing was "certainly offensive when it is broadcast to millions of families all across the country at the 8 o'clock hour."

ABC issued a statement saying, "Unfortunately, one inappropriate phrase sung by one performer was initially missed and made it into the East Coast network feed. It was subsequently edited out of the West Coast feed."

So, to the Parents Television Council, I say, loosen up … it was one bad word, a blip on the radar screen, certainly a mistake on the part of the censor. Who doesn’t make mistakes? And it got caught as soon as it could. Doesn’t the effort get a little bit of slack? Doesn’t this seem a bit over the top? There might be a little more support for PTC’s (hopefully more reasonable) efforts if stuff like this didn’t bring on such paroxysms of panic. –by CelebrityAccess Staff Writers