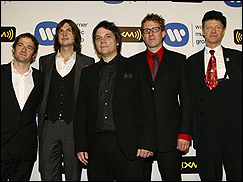 CHICAGO (CelebrityAccess MediaWire) — Alt-rockers Wilco, having fulfilled their contractual obligations to their former label Nonesuch, appear to be considering launching their own label.

"[Wilco] was basically not wanting to be on a record label for a while" the band's frontman Jeff Tweedy told Washington D.C.-based news outlet Express Night Out. "[The band will be] striking out on our own, our own label."

The band is reportedly considering releasing a 7-inch single connected with the Solid Sound Festival which is set to take place in North Adams Mass from August 13-15 and will be curated by the band, Billboard reported. – CelebrityAccess Staff Writers