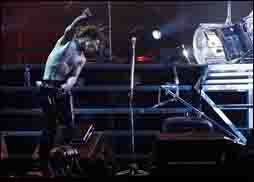 LOS ANGELES (CelebrityAccess MediaWire) — The progenitors of the Japanese Visual-Kei movement, X Japan kicked off their first tour of North American with an appearance at the legendary Wiltern Theatre in Los Angeles on Sept. 25th to solid reviews.

Visual Kei, or visual style is similar to glam in the use of heavy makeup with flamboyant costumes and elaborate hair styles.

The band, originally formed in 1982, disbanded in 1997, but not before selling more than 30 million albums and selling out the 55,000-seat Tokyo Dome 18 times. The band reformed in 2007 and has been busy touring Asia, highlights of which included a 2-day appearance at Nissan Stadium in Japan, with well over 100,000 fans in attendance.

The band released a new single, "Jade" on September 16th and have said that their next album is forthcoming in 2011.