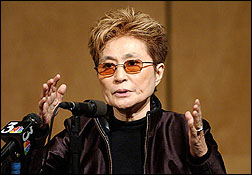 (CelebrityAccess News Service) – Yoko Ono will make an exclusive appearance at CMJ Music Marathon 2003 in a special conversation with veteran journalist and author Robert Christgau on
October 23. She will discuss her views on music, art, activism and
human rights.

The timing of this event coincides with the resurgence not only in the of Ono's art, but in her activism as well. Most recently she has
allied with Amnesty International, the world's largest grassroots human
rights organization, by granting the rights to use John Lennon's "Imagine"
in a two-year public education campaign. The new video for the campaign,
featuring children from around the world, will be shown immediately
preceding Ono's interview.

"We are excited and honored to have such a revered artist participate in CMJ
Music Marathon 2003," says Robert Haber, CEO and founder of The CMJ Network.
"Yoko Ono's extraordinary career has spanned all mediums of art while her
devotion and activism is felt by all. Her perspective and insight into a
variety of subjects will be of interest to all CMJ attendees."

CMJ Music Marathon 2003, recognized as one of the world's largest and longest-running music events, will be held October 22-25 at the Hilton New York, playing host to an extraordinary array of bands, fans and music business professionals, offering hundreds of shows at more than 50 venues. It continues to serve as a springboard for the best new music talent from a variety of genres. This year's performers include The Mars Volta, Broken Social Scene, Death Cab For Cutie, Echo &the Bunnymen, Adam Green, Killing Joke, Longwave, The Gossip, Anti-Flag, Josh Wink, Black Box Recorder, The Fever, My Morning Jacket, The Shins, The Stills, Rainer Maria, The Rapture and many more. CMJ Music Marathon also features more than 50 panels exploring some of the most
critical issues facing today's volatile music business. Additionally, CMJ
Music Marathon 2003 will host its annual FilmFest with screenings of cutting
edge films from emerging and established filmmakers, celebrating the
collaboration between the film and music communities. –Bob Grossweiner and Jane Cohen