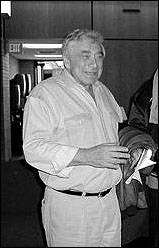 (CelebrityAccess News Service) – Walter Yetnikoff is back and has formed a new label, Commotion Records, along with Tracy McKnight, a former artist manager, music producer and music supervisor for over 50 pictures and some 200 recordings.

"Our niche is, for the moment, indie movies," says Yetnikoff. "Tracy and I felt this was the right place to start, because we're creating a unique approach that no one else is doing. We're ready to collaborate with a director or a studio in order to do the music supervising, acquire the soundtrack, or both.

"Filmmakers, producers and studios looking for an alternative option for creating their soundtrack," says McKnight. "I want Commotion to be the place for them. With Walter's business sense, and my background as a music supervisor, which requires a depth of knowledge in a myriad of music styles, we can oversee a film's music from conception to screen to soundtrack release. We believe in a hands-on approach, and I want people to come to Commotion because they'll know we will take very good care of their project."

An important element of the Commotion label's marketing strategy will be to stress the quality, artistry and uniqueness of their releases, thereby allowing the label considerable room to operate in an overcrowded marketplace.

"The very concept of an indie is that you're not bound by certain conventions," Yetnikoff points out. "Again, this is a niche, so you don't have to compete against the whole world, and Tracy knows this world well. You also have a built-in promotional vehicle, which is the movie. When you consider the advantages, we really are free to take a few shots at something new. I'm not talking about Karl Marx and overthrowing the Russian czars — just something a little innovative. The major labels certainly aren't going to do it."

Commotion Records has inked a unique deal with KOCH Entertainment, the largest independent record company in the country, to provide the label with comprehensive sales and marketing services. "So we're free to try innovative approaches in the marketing area with the help of a company that's willing to do something new," Yetnikoff adds.

"There is no one better to have in your corner than Walter; he's truly one-of- a-kind, bar none," says McKnight of her partnership with Yetnicoff. "And with Commotion, I think the name best describes our vision — what it's like to move into a crowded world and create your own voice. To me, creating a commotion is necessary, and we will do just that," she says.

Commotion's premiere release, due out November 11, will be the soundtrack to The Cooler (Lions Gate Films), directed by Wayne Kramer and starring William H. Macy, Maria Bello and Alec Baldwin. –Bob Grossweiner and Jane Cohen

(CelebrityAccess News Service) – Kindling Music, a new independent Canadian record label, is the brainchild of R.J. Guha, who currently operates Matrix Entertainment, a management company representing Spek, MacKenzie, The Salads and Kathryn Rose. It also manages industry newcomer Tony Kleinscroth, who has spent the last 10 years working in the volatile high-tech sector for some of Canada's largest technical infrastructures and service companies. Also new partner Mike Apted, president of Aperture Music, brings a wealth of Internet experience to the table as a former partner in Inquent.com, one of the world's largest web hosting companies. The label aims to provide an environment where they can incubate artists and build a solid fan base while giving the artists the time and freedom they need to fully appreciate their potential.

"Kindling Music was created to fill the gap between artists and major labels," says Guha. "Because we are small, we can take the time and care in nurturing serious career artists as they build a solid fan base and a story. Because we are independent, we are able to make decisions outside of the major-label machine, allowing for unique or non-traditional approaches to marketing artists."

EMI Associated Labels Division Director, Steve McAuley says, "RJ has continued to show his support and nurturing of the independent artist community. Establishing Kindling Music was a natural progression that we look forward to being a part of."

(CelebrityAccess News Service) — Canadian music publishers have entered into a landmark agreement with record labels and online distributors of sound recordings. In a breakthrough agreement signed On October 9 by David A. Basskin, president of the Canadian Musical Reproduction Rights Agency Ltd. (CMRRA) and Brian Robertson, president of the Canadian Recording Industry Association (CRIA), CMRRA has agreed to issue licenses to Internet music distributors. The agreement establishes the framework for standard terms and conditions under which CMRRA will do business with these important new services, and opens the door to their launch in the Canadian marketplace.

CMRRA will be entering into licensing agreements under this framework with Napster, MusicNet and Puretracks., Puretracks, a Canadian-owned service, will launch on October 14. MusicNet and Napster are scheduled to debut shortly thereafter with others expected to follow. Each of the services will offer upwards of 250,000 CD-quality songs on both a streaming and a la carte basis with prices starting at 99 cents.

"This agreement sets up a solid, practical system to enable these new on-line services to obtain the rights they need to do business in Canada," said Basskin. "Music publishers and songwriters are vitally important members of the music industry, and this agreement ensures that their rights will be respected – and that they'll be paid for the use of their songs. We've all suffered the plague of unauthorized file 'sharing'.The best response is a legal, attractive alternative that will give the customers all of what they want – the world's best music – and none of what they don't want – spyware, porn and viruses."

"This is truly a defining moment for the Canadian music industry," noted Robinson. "After four years of devastating retail losses to on-line piracy, we finally have the opportunity to positively embrace the technology with a dynamic new legal on-line retail experience. It will be rewarding for all concerned, including consumers, artists, songwriters, music publishers, record companies and the thousands of Canadians whose livelihood depends on a healthy music industry".

CMRRA is Canada's largest music licensing agency. Founded in 1975, CMRRA represents more than 10,000 music publishers, from the world's largest firms to individual copyright owners. On their behalf, CMRRA licenses the reproduction of their songs on CDs and cassettes, in films, television programs and commercials, for distribution via the Internet and in a host of other settings. CMRRA is a subsidiary of the Canadian Music Publishers Association.

CRIA is a non-profit trade organization that was founded in 1964 to represent the interests of Canadian companies that create, manufacture and market sound recordings. CRIA's membership is comprised of the major record companies, leading independent labels and all manufacturers of compact discs and tapes. In all, they represent 95 per cent of the sound recordings that are manufactured and sold in Canada. –Jane Cohen and Bob Grossweiner

TouchTunes and Sony Enter Into Agreement for Digital Jukeboxes

(CelebrityAccess News Service) — TouchTunes Music Corporation, the world's leading provider of interactive music-on-demand digital jukeboxes, has entered into an agreement with Sony Music to include Sony Music recordings in its digital jukeboxes. This agreement will provide TouchTunes' digital jukebox customers with the ability to hear some of their favorite music from Sony Music's vast catalogue ranging across many music genres, including tracks by such artists as Beyonce, Celine Dion, John Mayer, Montgomery Gentry, and Stevie Ray Vaughan, among many others.

Included in this agreement is repertoire from Sony Discos. A leader in Latin music, Sony Discos repertoire includes songs from the genre's outstanding artists, including Ana Gabriel, Chayanne, La India, and Sin Bandera, to name just a few.

"We are pleased to extend the reach of our artists through TouchTunes digital jukeboxes," remarked Philip Wiser, chief technology officer, Sony Music Entertainment. "Sony Music remains a strong supporter of legitimate online music services, and by finalizing agreements with providers such as TouchTunes we grow closer to making our catalogue available to music fans wherever and whenever they want to hear great music."

"We are very pleased to have entered into this significant agreement with Sony Music. The addition of Sony Music content will be beneficial to our customers. With this agreement TouchTunes now has licenses with each of the five major labels which solidifies TouchTunes' position as the leader in the industry," said John Perrachon, CEO and president of TouchTunes. "TouchTunes presently has in excess of 7,000 digital jukeboxes installed and, with the continued support of the record labels and the cutting-edge technological features of our products, we expect to continue our penetration into the jukebox industry." –Bob Grossweiner and Jane Cohen

(CelebrityAccess News Service) — Musicmatch, Inc., the leader in personalized music software and services, has signed download sale agreements with Beggars Group, V2 Records and Koch Entertainment for its recently launched music download service. Musicmatch is now licensed to sell more than 500,000 tracks from all five major labels and hundreds of independents through its Musicmatch Downloads service, which launched last week. More than 240,000 songs are currently available for purchase, with thousands added each week.

"These music deals allow us to offer a service we have envisioned for years — one that is friendly and compelling for consumers and puts artists in touch with their fans," said Peter Csathy, Musicmatch president and COO. "A deep and eclectic catalog of downloadable music combined with our unique recommendation technology gives music fans a whole new way to effortlessly discover and buy music they love."

UMG to Utilize eBay for Sales and Auctions Including Concert Tickets

The first promotion began October 16, featuring a mix of one-of-a-kind items. On the block over the next month will be Bon Jovi's signed guitars and handwritten lyrics, front row tickets to Jay-Z's upcoming performance at Madison Square Garden, and a personal drum lesson with Nickelback drummer Ryan Vikedal.

The online store will provide fans with access to classic catalog records and vinyl, ranging from Jimi Hendrix's "Are You Experienced?" to John Coltrane's "Live at Birdland," as well as autographed box sets from UMG artists. Twelve-inch singles and imports will also be offered through the store. eBay music fans will be able to place bids or purchase these items at a fixed price.

UMG will reach eBay's 75 million registered users through prominent online promotion on the eBay site, and through numerous cross-marketing activities.
"Through our collaboration, Universal can now tap into eBay's loyal user base and connect more fans to the music they love," said Bruce Resnikoff, president, Universal Music Enterprises. "This new relationship enables us to provide passionate music fans with a one-stop shopping experience where they can purchase the music and memorabilia of some of their favorite artists."

"Universal Music Group boasts many of the best artists in the music business and represents the first major record label to establish a formal agreement with eBay. We are thrilled to team up with Universal, bringing their music to fans on eBay," said Mike Aufricht, vice president and general manager of eBay Entertainment. "Through our relationship with UMG, eBay music enthusiasts and collectors will have unparalleled access to a broad range of items, including new releases, rare finds, mementos, tickets, and once-in-a-lifetime personal experiences with their favorite bands." –Bob Grossweiner and Jane Cohen