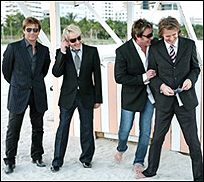 The group recognized PopJax as a vehicle to reach their fans worldwide through the internet and social networks. Fans will find trivia questions that are based on concert footage, music videos, hit songs, and personal information about the band members. Players can win exciting prizes such as autographed guitars and band memorabilia. On November 11, the games will be available on dedicated Duran Duran pages such as Popjax.com , PopJax’s Facebook page at http://apps.facebook.com/popjaxx, www.duranduran.com, and Duran Duran’s Fan Community site at www.duranduranmusic.com.

“PopJax games are a very innovative and entertaining new way for us to interact with our fans around the world,” said DURAN DURAN frontman, Simon LeBon. “As a band, we are always looking for different ways to expose our music and to give something back to our fans. When we started out, MTV provided that opportunity. Now it’s about the internet and how we communicate with our fans–new and long-standing, online, in a totally different way.”

“We’re stoked to be working with Duran Duran” said Doug Barry, PopJax CEO and founder. “I think the even bigger opportunity to recognize is that we’ve created a new vehicle for artists and musicians to interact with their fans. And, it’s totally viral so their fan base has the potential to grow through players sharing the games with friends.”

Duran Duran have remained at the forefront of popular music for over three decades, with a unique sense of style and confidence. Since their inception, the band has sold over 70 million records, recorded a plethora of hit singles, and has been presented with no fewer than five prestigious “Lifetime Achievement” awards (MTV Video Music Award, Q Magazine, The BRITS, Ivor Novello, Spanish Ondas). Their global presence, combined with the release of consistently strong material has long guaranteed them huge concert audiences on five separate continents. On their latest offering, Red Carpet Massacre (Epic), the band has been writing and recording with producers Timbaland and Nate ‘Danja’ Hills, alongside today’s reigning king of pop, Justin Timberlake. Garnering them some of their best reviews to date, RCM has been described as “… a stroke of lightning captured on record… a triumph, a marvel, and a hell of a lot of fun.”