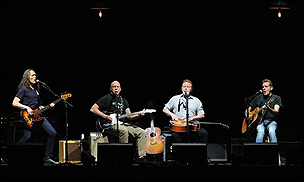 LOS ANGELES (VIP-NEWS) — The History Of the Eagles world tour, launched in July of last year, has grossed more than $145 million, according to numbers released by Eagles manager Irving Azoff.

The band has performed in front of 1.1 million fans in North America and Europe over the past year, touring in support of the documentary of the same name.

Boxscore since the band re-united for the 1994 Hell Freezes Over tour. “The worldwide strength of the Eagles live business is unparalleled,” Azoff tells Billboard. “It just grows and grows.”

The History of the Eagles European leg wraps July 2nd in Lucca, Italy and continues with a series of U.S. dates beginning Aug. 25 at the Tacoma Dome in Tacoma, Wash. The late summer/fall leg includes fourth and fifth concerts at Madison Square Garden; adds another L.A.-area date on Oct. 3 at the Honda Center in Anaheim, Calif.; and concludes on Oct. 4 at Viejas Arena in San Diego, Calif. The 2015 leg of the tour kicks off in February for concerts across Australia and New Zealand.

Launched July 6, 2013, in Louisville, the Eagles have performed a total of 87 History of the Eagles concerts, including three sellouts at Madison Square Garden in New York; six sellouts nights for the reopening of the Forum in Inglewood, Calif.; three sellouts at the 02 Arena in Dublin, Ireland; and four sellouts at London’s 02.

On the July 2013 leg alone, the tour broke several box office records, including the highest grossing act of all time at KFC Yum Center ($2,023,625)vthe biggest draw in the history of Milwaukee Summerfest on July 17, with 22,672 tickets sold; and a 12-show run across Canada that sold 150,000 tickets and grossed more than $17.5 million.

The unique chronological live presentation of the band’s catalog on the History of the Eagles tour parallels the History documentary, with a set list that includes classics spanning their career, including some songs never performed live prior to this tour. The superior sound quality afforded in indoor arenas adds to the aesthetic impact of the History shows, which have received rave reviews since the tour began. “These are the best Eagles shows I have ever seen,” says Azoff, who has managed the band for some 40 years. “I love this show. No one should miss it. I also admire them for keeping the ticket prices affordable, and foregoing stadium and outdoor dates for the best possible environment for their fans to experience this amazing show.”

The Eagles have sold more than 120 million albums worldwide, and the band’s "Greatest Hits 1971-1975" is the best-selling album of all time, exceeding sales of 29 million units. The band’s "Hotel California" and "Their Greatest Hits Volume 2" have sold more than 16 and 11 million albums, respectively. The Eagles were inducted into the Rock & Roll Hall of Fame in 1998.