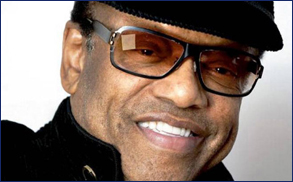 NEW YORK (VIP-NEWS) — Some of the biggest names in music have paid tribute to singer and songwriter Bobby Womack, who died on Friday.

Peter Gabriel said the musician was a "soul legend" while Ronnie Wood said his friend would be "greatly missed".

Womack, whose hits included Across 110th Street, was inducted into the Rock and Roll Hall of Fame in 2009.

The cause of death was not announced, but he had suffered from cancer and Alzheimer`s disease and battled with drug addiction.

He had been due to perform at the Womad music festival in Wiltshire, UK, in July.

In a statement on Saturday, Womad`s founder Peter Gabriel said Womack`s "songs and his voice have been so much a part of the fabric of so many musical lives".

Ronnie Wood, who covered Womack`s It`s All Over Now with The Rolling Stones, said "the man who could make you cry when he sang has brought tears to my eyes with his passing".

American singer-songwriter Kelis said: "There are a few people that really resonate from that era of soul music and he`s definitely one of them.

"He left so much for us as a guideline and to be inspired by, musically."

Other tributes came from Red Hot Chili Peppers bassist Flea, who said he was a "beautiful dude", and Damon Albarn, who collaborated with the singer, who tweeted: "I will see my brother in church".

Gospel singer Candi Staton, who knew Womack since childhood, said he had "a style that nobody else could ever capture".

Bobby Womack sits with his dogs, a French bull dog named Music, left, and a pug named Wo – 22 June 2012 Womack outlived many of the artists he played with when he gained attention in the 1960s

Womack was born in 1944 in Cleveland, Ohio and began singing in a gospel group in the 1950s with his brothers.

He later gained attention after the siblings signed to SAR Records in 1960.

The brothers, including Cecil, Curtis, Harry and Friendly Jr, cut two R&B albums as the Valentinos.

Later the group broke up and Womack turned to song writing and a solo career.

He outlived many of the acts with whom he played and with whom he was friendly, including Jimi Hendrix and Wilson Pickett.

His songs were recorded by many artists, including Janis Joplin. His friend Sam Cooke persuaded him to let The Rolling Stones record It`s All Over Now.