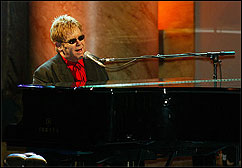 Elton John has extended his exclusive show "The Red Piano" at Caesars Palace in Las Vegas through 2008. Originally scheduled for 75 shows over a three-year period beginning February 13, 2004, the resort accelerated the initially planned 25 shows per year, completing the original commitment in fewer than 18 months. The new agreement provides for an additional 150 shows through 2008. The next run of shows are July 26-31 and October 4-23.<./P>

"I am absolutely delighted with the extension of 'The Red Piano,'" said John. "I love playing at The Colosseum and it is the best venue in Las Vegas. Thank You Caesars!!"