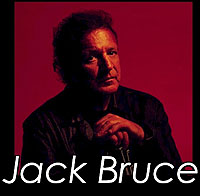 "After Jack was diagnosed with liver cancer earlier this summer, we went through a very difficult period of uncertainty, not knowing whether it would be life threatening. Jack spent 3 weeks on and off in hospital for examinations. When we were told Jack could have a liver transplant, then we knew that there was real hope and we were overjoyed! In reality what it meant was waiting for a donor and then having the operation, which went very well. Unfortunately there was a rejection of the new liver, infection and then kidney failure. Anyhow Jack had his successful transplant on 19th September 2003 and after being very critical for a period in which we almost lost him, Jack is now making a successful recovery. The whole family is very relieved, that Jack will be with us for many years and obviously we are looking forward to more new songs, concerts and records to come! I am sure all the fans all over the world will feel the same as the Bruce Family.”

"We hope you will enjoy and celebrate the new album 'More Jack Than God' which was released by Sanctuary Records worldwide almost on the day of Jack's transplant. The pictures in the album booklet could well have been the last pictures of Jack. He has proved us wrong, after all, he is a strong Scotsman!”

"We would like to take this opportunity to thank the staff at Addenbrookes Hospital in Cambridge for the dedication and expertise they have shown".
The Bruce Family

Sanctuary Records sent best wishes to Jack and his family and hopes for a speedy recovery.

Joe Cokell, CEO Sanctuary Records Group, says:
"Jack Bruce, apart from being one of the finest & talented artists in the Sanctuary family, has also shown through the past couple of months his inner strength and determination in fighting off this very serious illness. We look forward to his complete recovery and a full and active return to the musical world that he has been part of for more than 4 decades. Jack's new album 'More Jack Than God' released in September has received glowing reviews and it is testament to Jack's creative talent that he is producing work of such stature here and now." –by CelebrityAccess Staff Writers