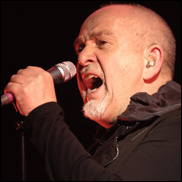 "Grab your things I've come to take you home"

Oldsters go to the show to relive their youth. They pack picnics, drink wine, stare at the stars and talk. Remember when they were young and bold instead of old and calcified. They leave early to beat the traffic. They say they love music, but not as much as their lifestyle. Music is an accessory, like their BMW, like their Prada clothing.

Youngsters believe their music rules. That they're reinventing the wheel, as if classic rock never existed.

And stuck in the middle are you and me. Who remember when but want to still believe now.

But in order to believe, we need artists, who are willing to test limits, to take chances, who are not bound by conformity, but see the sky as the limit.

I'd like to tell you I think "Scratch My Back" is the shit. But it's a bit too down and depressing, and I love depressing music. It's just that the covers are obscure, and there's passion, but…

Then again, the songs are different live. The strings soar and Peter beams his voice over the audience like a mellifluous bullhorn, broadcasting the news. That's the amazing thing, we cut the oldsters breaks. Roger Daltrey can't come anywhere near the high notes, but he was once at Woodstock, he was the lead singer of the Who. Genesis with Gabriel in it was never as big as the 'oo. And by time he peaked on MTV, in '86, with "Sledgehammer", we were already in the era of fake, where you didn't have to have the chops to look like you possessed them. But Gabriel's lost nothing in the passing years. He had it then, and he's still got it now.

And the anti-charisma charisma is truly head-spinning. With the sun still shining, with the audience still milling, Peter came out and introduced the opening act. He feigned none of the hipness of the TMZ/Perez crowd, he broke character, he played the role of a normal person, and we loved him ever the more for it.

And the staging! Peter had a hi-def screen in front of the orchestra! As well as behind. We weren't subjected to the usual rock and roll images, but art. Peter was not playing to our expectations, he was taking us on a ride, grabbing our hand and taking us into the stratosphere.


Then again, we had expectations. Gabriel always pushes the envelope. That's why we went. Because a fan can't miss it, they don't know what he'll do. Whether it be the crowd-floating of decades yore or the mirror trick of last night. You ooh and ahh, feel like you're having a once in a lifetime experience.

And he killed Arcade Fire's "My Body Is A Cage". There were dynamics live that were barely perceptible in the recorded version.

But when the orchestra started playing the opening riff to "Solsbury Hill" deep in the show, the same yet different, strings a soarin', the audience erupted, as if we'd all been injected with a hypodermic, which made us not only remember who we once were, but who we still could be.

This was a sit-down show. But as if commanded by the Pope, when "Solsbury Hill" began we all stood, at attention, ready to ride this spaceship anywhere!

"Had to listen, had no choice"

We were addicted to the radio. You had to tune in to know which way the wind blew. Our hero wasn't Steve Jobs, but true artists. Not people who created tools, but marvelous works which were ends unto themselves.

"I did not believe the information"

This guy did not do it the American way. He didn't spend Daddy's money to get noticed and then let himself be shaped by the machine. After breaking performance ground with Genesis, Peter Gabriel went his own way. Less successfully. To the point where his record company wouldn't even release his eponymous third solo record, it came out on Mercury, which is like having your record available only at J.C. Penney. But the music was so good that Peter eventually landed a deal at Geffen, his rep spread, when the world wasn't even ready he broke video ground that's never been superseded.

Then there was that magical moment with Lloyd Dobler, blasting "In Your Eyes" from that boombox into Diane Court's bedroom.

Peter was not the biggest, but he was one of the best. And no one was more credible.

And the drums are pounding out a tribal beat. But most fascinating is Peter's behavior itself. He's dancing around on stage like a five year old, in a circle, with a smile on his face, elated. The mad magician, the pied piper we can't help but follow.


"Today I don't need a replacement"

I don't need to shave years off my age, get a toupee, like Peter I'm proud to wear the years on my face and body, they show experience and knowledge, of when music mattered.

"I'll tell them what the smile on my face meant"

It meant that I had hope. If Peter Gabriel could be this good, could play by his own rules and win, think of the possibilities!

Was this show a complete success?


Was this a reverential oldies presentation?

This was an artist, working in his chosen medium, music, demonstrating to all that there are no limits, there is no higher art form. That it's not about money, it's not about choreography, it's about creativity.

Peter walked the high wire. Stumbled a few times. But we were dazzled all the while. In an era where people line up to sell out, where they use the usual suspect producers to sound the same, where businessmen tell you to eviscerate the risk, Peter is still hitched to that eagle that flew out of the night. And last evening, he took us along for the ride.