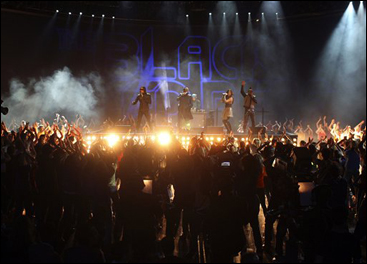 The North American leg of "The E.N.D. World Tour 2010," produced by AEG Live, will kick off at Philips Arena in Atlanta on February 4, 2010, and conclude on April 11th at GM Place in Vancouver. After a short break, the tour resumes in May with shows across Europe and the UK. Special ticket pre-sales for The Black Eyed Peas' fan club members will be announced in the days ahead. National ticket on-sale dates begin December 12th. Ticket prices will carry reasonable value and will be accessible to all fans.

In support of their multi-platinum #1 album, The E.N.D, featuring the chart record-breaking consecutive #1 singles, "Boom Boom Pow" and "I Gotta Feeling" – The Black Eyed Peas will replicate the party vibe of a hot dance club (complete with guest DJs including will.i.am ) in arenas across the country and around the world. "The E.N.D. World Tour" proves The Energy Never Dies with a feast for the senses for hundreds of thousands of fans. The tour will also be "green," with a unique charitable component to be announced in the weeks ahead.

"AEG Live has always been a company that likes to execute out-of-the-box ideas. Our newest clients, The Black Eyed Peas, have defined that concept like no other group in contemporary music and culture," says Randy Phillips, President & CEO of AEG Live. "We expect our first hundred shows together to be a roller coaster ride that will redefine the live entertainment experience as only the Peas can."


2009 has been a monumental year for The Black Eyed Peas, starting with the March release of "Boom Boom Pow" – not only the group's first #1 single on the Billboard Hot 100 but one of the top dozen or so longest-charting singles in Hot 100 history, 12 weeks at the top. They bumped themselves out of #1 with their second single, "I Gotta Feeling" (released in June), surpassing their own success with a 14-week stay at #1 (only the fourth group in Hot 100 history to replace itself at #1). Their 26 consecutive week run at #1 has now become a new all-time benchmark in Hot 100 history (for groups or solo artists).


Meanwhile, flush with two massive hit singles, The E.N.D. (released June 2, 2009) debuted at #1 on the Billboard 200 albums chart with the highest first-week sales of The Black Eyed Peas' career.


The E.N.D., The Black Eyed Peas' fifth studio album, is also their first original album since Monkey Business (released May 2005), certified RIAA triple platinum in the U.S., with worldwide sales of more than 9 million copies. Monkey Business generated Grammy Awards over two consecutive years, for "Don't Phunk with My Heart" and "My Humps." The Peas' first Grammy Award came six years ago, for "Let's Get It Started," from their breakthrough album of 2003, Elephunk, which introduced Fergie into the lineup, and turned the group into international superstars with cumulative 25-times platinum sales in nearly a dozen countries around the world. In 2006 Fergie released her 6 million-selling solo debut The Dutchess and in 2007 Producer Of the Year Grammy nominee will.i.am released Songs About Girls. Of special note is will's involvement in the 2008 Presidential campaign of Barack Obama, whose song, "Yes We Can" was written by will.i.am, as well as the two post-election anthems, "It's A New Day" and "America's Song."


To date, The Black Eyed Peas have sold over 27 million combined units worldwide, and have logged over 300 headline tour dates in 29 countries with over 2.2 million tickets sold.