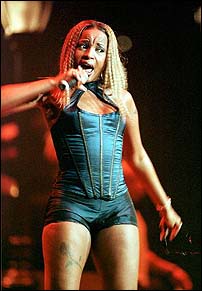 (CelebrityAccess News Service) – Mary J Blige, Missy Elliot, Gladys Knight, and Maze featuring Frankie Beverly have been confirmed as the first wave of talent at the 10th anniversary of the Essence Music Festival, July 2-4 in New Orleans. Additional performers will be announced in upcoming weeks.

Special 10th Anniversary ticket discount packages are just in time for the holiday season. Until December 31, 2003, festivalgoers will receive a 10 percent markdown to evening concerts when purchasing packages at the $45 and $55 ticket price level. The package consists of three tickets, one for each night of the concerts. Tickets are also available at $35, $75 and a very limited number in the Golden Circle section at $125. Naturally, tickets are subject to additional service charges.

This multigenerational event is the largest annual gathering of African-Americans in the United States. During the day, fans attend the Empowerment Seminars, which are held in the Ernest N. Morial Convention Center and are free to the public. The seminars feature renowned speakers, authors and national leaders. The Convention Center is also home to the ESSENCE Marketplace, an area that offers Louisiana cuisine, unique gift items, sponsor activities, festival souvenirs and a book fair with author book signings. In the evening festivalgoers dance and sing along with the biggest names in entertainment, rhythm and blues, jazz, classic soul, hip-hop and neosoul, on five stages within the Louisiana Superdome.

"Laughing Room Only" was a first for Mason, a musical revue which featured Mason's standup comedy interspersed with songs and sketches, most of them performed by five other actors. Mason has been a Broadway perennial since 1986 when his first one-man show, "The World According to Me," became a big hit.

(CelebrityAccess News Service) — The United Service Organizations and Jim Brickman have joined forces this holiday season to support our troops overseas. Brickman's new holiday CD, Peace, features the emotionally-charged song, "Sending You A Little Christmas," which has been chosen as the theme song for this year's "Operation USO Care Package" campaign, and was launched with a mini-concert for the troops at BWI Airport in Maryland on November 19.

With hundreds of thousands of U.S. troops deployed around the world, many engaged in the fight against terrorism, the USO is offering a way to send a reminder to the troops that they are appreciated and have not been forgotten. Endorsed by the Department of Defense, "Operation USO Care Package" provides individuals with a way to touch the lives of our deployed troops around the world.

Brickman will be joined by two guests on his Jim Brickman & Friends 2003 holiday concert tour, Kristy Starling and Jeff Timmons (founding member of the group 98 Degrees) to perform for troops deploying from BWI Airport. The event will kick off the partnership between Brickman and the USO and feature Starling performing "Sending You A Little Christmas" and Timmons singing the title track on Brickman's CD, "Peace."

"When I was writing 'Sending You A Little Christmas' earlier this year, I saw footage of soldiers leaving their families to fight a war," said Brickman. "I wanted to create that same kind of emotion that said that even though we're separated from each other by thousands of miles, we can still send our loved ones the spirit of Christmas." To capture the sensitivity and warmth of the song Brickman selected young vocalist Kristy Starling.

Following the BWI Airport performance, all three will head to Fort Meade to attend a "stuffing party" with volunteers prepping more packages for the holidays. Each artist will donate hundreds of copies of their new Cds, and, to further support the cause, Brickman will continue to endorse and promote "Operation USO Care Package" during his 30 city holiday tour which begins November 28, 2003.

"We are proud to work with Jim Brickman as he supports our men and women in uniform through his dedication of his time and talent to raise awareness for Operation USO Care Package," according to Elaine Rogers, president, USO of Metropolitan Washington. –Bob Grossweiner and Jane Cohen

(CelebrityAccess News Service) — Due to extraordinary fan response and overwhelming ticket demand, Alabama's farewell tour will continue through 2004. Clear Channel Entertainment is the sponsor the American Farewell Tour. The first leg of The American Farewell Tour included stops in 40 different markets. To date the tour has attracted an audience of over 400,000 with ticket sales in excess of $20 Million.

Brian O’Connell, vice president, Clear Channel Entertainment-Touring shares the success story, “We anticipated a successful turn-out and have enjoyed an overwhelming response. But, the fans and ticket sales have clearly demonstrated The Alabama Band is still in demand and aren’t done yet. Clear Channel and the Alabama Band have concurrently agreed there are more fans to visit before concluding The American Farewell Tour.”

"I had hoped Clear Channel might extend The American
Farewell Tour to allow us to perform in places that weren't on the original tour schedule," adds Alabama lead singer Randy Owen. "It gives us a chance to play for these fans. We are grateful to everyone involved in promoting and coordinating the tour and we appreciate the hard work and the opportunity to play for our fans.”

Show-goers get their money's worth. The American Farewell Tour show is a 3-hour plus concert event during which Alabama performs a collection of songs from their list of over 60 Top 10 radio releases including many of their 42 No. 1 hits. The song list includes "Mountain Music," "Feels So Right, "Dixieland Delight," “Jukebox In My Mind," I'm In A Hurry (And Don't Know Why)," and "Roll On (Eighteen Wheeler)."

Because of overwhelming demand and popularity, Clear Channel Entertainment-Touring has agreed to continue to offer the “Platinum Bama” and “VIP Gold” ticket packages.
The “Platinum Bama” ($1,000) package includes front-of-stage concert seats. Platinum ticket holders are escorted backstage after the show where they are treated to a mix and mingle session with other Platinum Bama ticket holders and then will have professional photos taken with members of the band. In addition, they will receive a personally autographed, custom made, numbered, limited edition Les Paul Jr. Epiphone (Gibson) collector’s electric guitar, which is presented to them in a carrying bag bearing the official Alabama logo. Eight thousand (8,000) limited edition Les Paul guitars have been produced for The American Farewell Tour and the Platinum Bama ticket is a hot seller. Only 3,000 guitars remain in the collection, quantities are limited in each city, and only available while supplies last.

O’Connell adds, "The abundant fan and obvious market demand make it a necessity to extend The American Farewell Tour and Clear Channel Entertainment is delighted in the opportunity to continue—to be part of Alabama history.”

Alabama drummer Mark Herndon sums it up: "I’m not ready to pack it up yet. We're just getting warmed up. Don't sit down we're coming!" –Jane Cohen and Bob Grossweiner

NEW YORK (AP) — A mob of fans tried to force their way into a concert by rapper Jay-Z, resulting in six arrests, police said.

No one was injured in the crush, which began around 9:30 p.m. Tuesday outside the concert at Madison Square Garden.

Officers were called in for crowd control and arrested four people for disorderly conduct and two others for obstruction of governmental administration, said police spokeswoman Jennara Everleth.

It was unclear what sparked the crush or how many of the fans had tickets, police said.

The concert, billed as the start of Jay-Z's final nationwide promotional tour, was sold out.