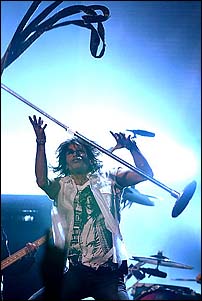 (CelebrityAccess News Service) – In an effort to contend with the ongoing struggle with hunger and poverty this holiday season, Aerosmith plan to aid hunger organizations at their upcoming concert dates. The project is the result of an alliance the band initiated with World Hunger Year (WHY). WHY's Artists Against Hunger &Poverty program
annually enlists performing artists to help raise funds and awareness for community-based organizations working to fight hunger, and has raised more than $6.5 million in concert-related donations for more than 500 grassroots,
hunger and poverty organizations in the US.

"In a country as rich as ours, the fact that there are so many people living in poverty and children are going hungry every day tells me that our spiritual bank account is way too low," said Aerosmith's singer Steven Tyler. "It's just unacceptable."

According to the United States Department of Agriculture, 33 million people–including 13 million children– live in households that experience hunger or the risk of hunger, representing one in ten households
in the United States. Concert-goers are being asked to bring two cans of food to shows where drop boxes will be established to receive donations. The program kicked off November 20 at Aerosmith's concert at Washington DC's
MCI Center with The Capitol Area Community Food Bank.

"Through the years, our fans have always been willing to help make a difference, so we're asking them again to do what we always do when we are on the road in the holiday season, help us feed those people in need and our spiritual
bank account all at the same time," adds Tyler.

"Anything you can do is greatly appreciated," said guitarist Joe Perry. "We live in a great country where nobody should go to bed hungry."

Aerosmith's co-headlining tour with Kiss runs through December and is produced and promoted by Clear Channel Entertainment. Concert dates and participating local organizations for Aerosmith's food bank initiative are
as follows:

NASHVILLE, Tennessee (AP) — Dixie Chicks singer Natalie Maines, whose criticism of President Bush last spring led to boycotts of the group's music, still has a lot to say about the war in Iraq.

The country stars faced criticism and even death threats after Maines said she and her bandmates were ashamed that President Bush was from Texas. She made the remark in London shortly before the war began.

Though Maines apologized for the phrasing of her remark, some radio stations banned the group's music. The group also received death threats in the wake of Maines' comments.

Maines said Friday she did not feel vindicated by how the war has unfolded: "I would have liked to have been proven wrong."

The band's recent concert tour was one of the year's most successful, but Maines said it is too early to predict the long-term fallout.

As for the backlash, she said, "We like making music and we'll continue to do that whether people buy it or not."

The Dixie Chicks on Friday released, "Top Of The World Tour Live," their double CD set and DVD.

(CelebrityAccess News Service) – Actor/comedian D.L. Hughley ("The Hughleys," "Original Kings of Comedy") has signed on to host "Liar," a U.S. adaptation of the hit comedy game show of the same name created by FremantleMedia's company Talkback for the BBC. The project is currently in pre-production and is being piloted by CBS for early 2004. "Liar" is a co-production between FremantleMedia North America ("American Idol," "Cupid") and Reveille Productions ("The Restaurant," "Coupling"), with Ben Silverman and David Lyle serving as executive producers, respectively, and H.T. Owens ("The Restaurant," "Nashville Star") as co-executive producer in association with 3 Arts Entertainment. ICM brokered the deal for Hughley.

"Liar" is the perfect 21st Century vehicle for D.L. Hughley's amazing talent. I am thrilled to be bringing this exciting franchise to CBS," Silverman stated.

Added Lyle, "'Liar' is a wonderful coming together of a game show structure with unpredictable, freewheeling standup comedy. With Hughley's inspired ad lib humor as the central catalyst, we intend for 'Liar' to move the game show platform into new and exciting territory."

Hughley humorously remarked to his hosting of "Liar" with, "I am excited to be doing a show about the very thing at which I am an expert."

Currently airing in five markets worldwide, "Liar" was launched successfully on BBC UK in August. The British show is a hilarious verbal give-and-take between six contestants and an inquiring audience. This repartee is mc'd by the host, who also provides humorous commentary. All of the contestants claim to have had a common experience, but five of them are liars. The audience's goal is to weed out the posers, one by one, and identify the contestant who had the experience. If the audience succeeds, they share a cash prize; if they don't, the best liar standing takes home all of the loot. –Jane Cohen and Bob Grossweiner

Ringo Starr To Be Santa Tracker This Year

COLORADO SPRINGS, Colorado (AP) — Santa Claus will be traveling to the beat of a different drum this Christmas — Ringo Starr's.

The former Beatle will be the honorary Santa tracker as the North American Air Defense Command follows his progress Christmas Eve on a Web site and on a toll-free phone number for children.

The Web site will feature some of Ringo's Christmas music.

"Children will see amazing things. I'm privileged to be one of the Santa trackers," Ringo said in a statement released Monday by the command.

NORAD, based at Peterson Air Force Base, is responsible for the air defense of North America. Tracking Santa has been a tradition at NORAD and its predecessor, the Continental Air Defense Command, for more than 45 years.

CHARLOTTE, North Carolina (AP) — This is no routine December graduation ceremony at UNC Charlotte. Then again, Clay Aiken is in the graduating class.

The "American Idol" star will pick up his diploma at the 3 p.m. ceremony at Halton Arena on Dec. 20, according to his publicist.

For only the second time in the school's seven-year history, graduation guests must have tickets to get in. This time, each ticket will be printed with a bar code and be scanned at the door to prevent the use of counterfeits.

The school has already heard from television entertainment shows interested in attending, according to UNCC spokesman Tony Hoppa. And the university will meet next week to begin figuring out how to accommodate the media.

Hoppa also said Aiken has asked not to perform at the ceremony and declined a seat on the stage, saying he wants to sit with his fellow students.

Aiken will, however, be able to invite more guests — including family, friends and business associates — than most students, Hoppa said, and they will attend as guests of the chancellor. Other high-profile students, such as the senior class president and student speaker, can do the same.

"That's not a unique thing because of Clay," Hoppa said.

Aiken, 24, is finishing an independent study course at UNCC now, his last requirement toward a Bachelor of Arts in special education.

In addition to Aiken's likely appearance, UNCC is graduating a record number of students. More than 1,000 in the colleges of arts and sciences, and education are eligible to attend the afternoon ceremony.

Another 1,000 are eligible to graduate at a 10 a.m. ceremony the same day for architecture, business, engineering, health and human services and information technology majors.

The last time UNCC issued graduation tickets was in 1997, Hoppa said, when crowds were large and before the school went to two ceremonies.

WOODSTOCK, New York (AP) — Next time you're in Woodstock, stay with Kate Pierson of The B-52s. Pierson has opened a motel near Woodstock, N.Y., in the Catskill Mountains.

The motel is called Kate's Lazy Meadow Motel and sits on nine acres.

Pierson has decked out the motel with 1950s-style kitchens and what she calls "mind-blowing mid-century modern/space age/rocket-your-socks-off decor."

Rooms start at $150 per night for two-bedroom, two-bathroom kitchen suites.

Details can be found at www.lazymeadow.com.